I was around 8 years old when I discovered my deep connection with music. I was 11 when I heard Metallica and there was no turning back from that point. My sister had a boyfriend at the time who had an extensive heavy metal record collection and this was a big treasure chest of discovery for me. His brother played an electric guitar. I was 12 years old when the Black album came out. When I saw this guy play some of the riffs on his guitar with the music, I knew there and then what I wanted to do. It was a revelation. No doubt!

At the time I was 11 -12 it was Metallica, Guns N’ Roses, Megadeth, Sepultura, Testament, Floatsam and Jetsam, Black Sabbath, Whitesnake… Later on in my teenage years things became heavier and I took the gateway drug with Pantera before entering into bands like Cannibal Corpse and Deicide. Eventually I heard Mayhem’s ‘Freezing Moon’ and that was another huge revelation. In the next years I would only listen to Black Metal. Today I listen to anything and everything that is good music. I am mostly into cinematic music influence wise. I want to have my own sound and I avoid sounding like my favourite bands.

I dreamt of playing the guitar from that moment I saw the aformentioned guy play, but I had to wait until I was 14 to receive my first guitar from my parents. They were sceptical and thought this was just a phase. But they decided that since I wanted this so much, they should send me to a guitar teacher. I was very lucky to have private lessons from one of the best blues and jazz guitarists that Iceland has ever had. Although I hated the jazz chords, I was fine with the blues. I still benefit from those lessons today. That along with studying bands like Metallica brought me an understanding of the instrument. I do occational teqhnique lessons I see online. But the thing is that I am more of a song writer than a technical guru. When I learn a new scale, I transform it into a song instead of continuing practising. I guess that’s practise within itself. I play bass also but I play it like a guitarist and I use a plectrum. I still have not heard the case where fingering the bass sits well with my style of music anyway.

Cinematic music is a big thing for me and I also love discovering good music in video games. Today’s game standards are pretty much the same as in the movies but I am also talking about the old retro games. Diablo II is for example one of my all time favourite sound track. Just amazing. If I had to mention a modern composer, it would be Hans Zimmer. But usually I don’t even bother checking out who is making what so I am terrible with names.

I work in a print factory. It’s not the best job in the world but I like it there. I have a lot of chance there to be by myself and work on my music and lyrics in my mind. I even sometimes come up with beats and melodies there that I record by humming on my phone. This one time some glue was stuck to one of the rollers in one of the printers. As it was spinning, it was making some very cool rythm that I recorded and will definitely later use as a drum beat. I would of course often like to quit my “normal” job and just focus on the music but it takes a lot of discipline and it’s financially very straining. Although it often sucks having to leave my precious studio to go to work, I am aware that it is also what keep me on my feet. If you are always at home with all the time in the world, it is too easy to start procrastinating and eventually just lying around doing nothing. At least that is the case for me. But given the opportunity to only work for myself would of course be very hard to turn down.

*If you could start a band with other musicians on other instruments, which artist would you pick for wich instrument and why? (Something Like an “All Stars Band”.) Would you still go for a pagan metal / black metal band? Or would you do something completely different?

I would propably just go for a symphony orchestra and some assistant who would help me write the scores. I feel pretty fullfilled today with the metal. I have had a privilige to work with many musicians, some who are incredibly talented. I have been asked to put down this kind of dream lineup before and I go for James Hetfield on guitar or Hellhammer on drums or whatnot but the actual truth is that a band is all about the chemistry. You can put incredibly talented people together and they have no vibe with each other so nothing really happens. It’s like a football team that buys some star from another team and then that star just doesn’t shine at all anymore.

I will start by saying that these are my pick today and maybe I would pick something else tomorrow … ‘Gladiator’ soundtrack, ‘Diablo II’ soundtrack, Metallica – ‘And Justice For All’, Entombed – ‘Clandestine’, Cannibal Corpse – ‘The Bleeding’.

Those albums never get tired but maybe they would eventually if the sentence was for life. Then again, there’s so much more to choose from that this question is in reality impossible to answer anyway.

This album has a fresh and unique take on traditional Thrash and Black Metal. It however does not take the road of either trying to sound obscure or “pure” Blackmetal. The production is top notch and the riffs are catchy and hook laden. Those who have commented on this album so far say there is not a single weak song on here, or what we know as “fillers”. My personal favourite varies from time to time but I am more drawn to the second part of the album for sure. I feel that the second part sets us on a path to where we want go in the future. That future is promising and full of new inspiration for us. 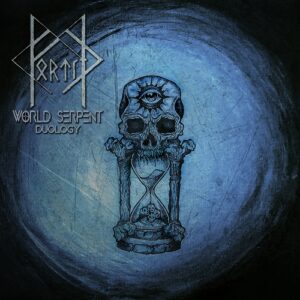 *Is there a chance that you will promote these songs through live concerts (when everything is back to “normal” after the covid 19 disaster)? If so, would you prefer small clubs or big festivals? And is there a chance we can see Fortíð in Belgium?

We have discussed this as a possibility. But the problem has been the expensive travel from Iceland. Maybe it will get even worse? I don’t know. But if we were to do some shows, we would only pick festivals. Both small and big ones are fine as long as we don’t loose money. Our lifes at home are good and busy and we have no need for a alternative life on the road. So there will be no touring.