The band comments: “We are pleased to finally unveil the cover of ‘Alphaville’. Working with Zbigniew has been a pleasure and he has put a lot of hard work into this magnificent piece. The detail is extraordinary and it pairs very well with the music. Imperial Triumphant has always tried to go beyond just the sound. We strive to create a fuller experience for the listener. This cover takes you deeper into the abyss of our world.”

Cover artist Zbigniew M. Bielak comments: “The extreme metal scene of today has long reached the apex of its aural inaccessibility. It has mutated so far beyond the rock and roll genome, that the sole artistic choices we’re left with, are often between cavernous, almost inperceptible pulse and a sonic-induced epilepsy. Although ecclectism is seemingly thriving, it takes a rare band like Imperial Triumphant to really push the envelope. Much like their home turf, lush with warm glimmer of brass, ripe with neuroses of alternative rock and crushing with weights of skyscraping Phalloi, Imperial Triumphant are bringing the New Crossover. And boasting legendary Trey Spruance of Mr. Bungle and Faith No More fame at the production helm, ‘Alphaville’ is indeed a transgenre, cinematic venture into gilded bowels of the New York mythos. Based on multiple intersecting perspectives, the cover illustration was meant to convey the soul of NYC. With all of its innate duality, all grandeur and insignificance dealt lopsidedly in seamless 24 hour cycles, and most notably – it’s architecture in mind – I wanted to keep the image perversely neutral rather than dark. Hence, unburdened by Metal, aesthetically it’s closer to honoring late master Syd Mead’s dystopics than – equally inspiring – hostility of HR Giger’s ‘Samurai’.” 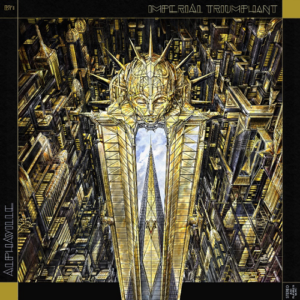 Also, make sure to check out the in depth behind the scenes that Metal Injection did while the band recorded “Alphaville” at Menegroth Studio in New York with engineer Colin Marston (Behold… The Arctopus, Dysrhythmia, Krallice and Gorguts) and Trey Spruance (Mr. Bungle) and Imperial Triumphant producing.

Zachary Ilya Ezrin (vocals/guitars) about the new studio effort: “Alphaville is the newest luxury product from Imperial Triumphant. We’re incredible proud of this lofty work and so glad that we could feature so many talents guests on it. It has been a huge collaborative effort and we’re very grateful to Colin Marston and Trey Spruance for helping to shape this beast. Century Media has also been a tremendous asset in helping us with the resources we needed to create such a record. The final product is truly splendorous.”

Imperial Triumphant officially began with their 2012 debut release “Abominamentvm”. The line up consisted of Zachary Ilya Ezrin on guitar/vocals and the rhythm section of their NYC contemporaries: Pyrrhon. Soon they met with drummer Kenny Grohowski and began to feature him on their next two releases “Goliath” (EP) and “Abyssal Gods” (LP). In 2015, they introduced bassist Steven Blanco into their lineup. In 2016, they released another EP “Inceste” which they toured heavily that year with temporary second guitarist Max Gorelick. 2018 brought about their magnum statement: “Vile Luxury”. It is a full length record written collectively by the trio (Ezrin, Grohowski, Blanco) in homage to their hometown New York City that brought jazz elements to the avant-garde black metal style in a way never achieved before. They toured Europe and North America extensively from 2018-19 in support of that album. 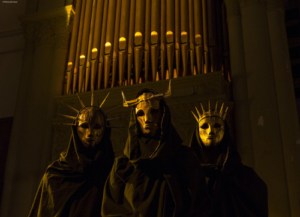