Ukrainian WWI experts 1914 join the Napalm Family! With their unique blackened death/doom metal sound, 1914 leads you back in one of the darkest chapters of the last century – they breathe The Great War!

Strongly influenced by genre pioneers like Bolt Thrower and Entombed, 1914 have already released two full length albums, Eschatology of War (2015) and The Blind Leading The Blind (2018), which making them one of the most talked about newer bands in the genre. From now on they are part of the Napalm roster! 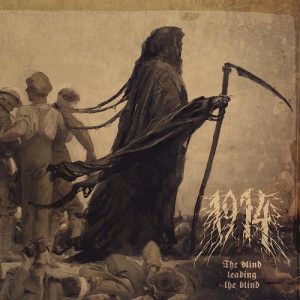 1914 on the signing: “We’re so excited to work with Napalm Records, the label we know very well and fully respect. We hope our cooperation will be really fruitful and awesome. 1914 want to tell the world about The Great War, about its horrors and the senselessness of war and murders. For us, the partnership with Napalm Records is a great chance to spread these ideas all over the globe, a chance to tell everyone that war is hell, that it’s only death, mud and fear, so fuck the wars!

Be sure, we are going to take full advantage of this chance. And for all those who consider our music as political, we can say ‘just go fuck yourself’ because the worst things to have ever happened with this world are religions, ideologies and their followers.”

Sebastian Muench A&R Napalm Records on the signing: “Napalm Records is proud to announce the signing of Ukraines blackened death / doom metal band 1914 and will re-release the epic album The Blind Leading The Blind later in the year. 1914 plays the most exciting war topic related death metal since the glory days of Bolt Thrower. Intriguing death / doom metal as the soundtrack of the hopeless, muddy trench war of WWI!”

“It’s neither about politics, nor about propaganda – it’s just war, trenches, fear, hopelessness and endless death around of you” –1914– 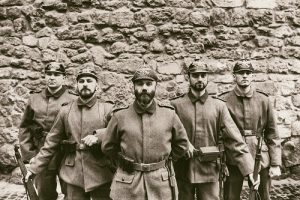