Being the timekeeper of Portugal’s most important metal band MOONSPELL for nearly 30 years, Mike Gaspar has finally settled on a new outlet with which to celebrate his love for heavy metal, his cultural heritage, and his passion for untamed, feral music with roots reaching deep into the fabric of our world. Now barely a year after announcing their inception, Seventh Storm will unleash their debut album “Maledictus” on August 12th, 2022 via Atomic Fire Records. 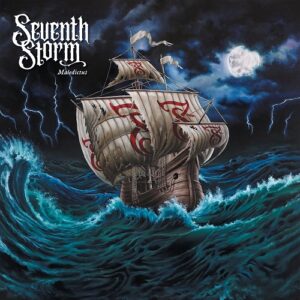 The omnipresence of death in the midst of blooming life and creativity is at the centre of the band. Here we see a hungry combo arise that has given their soul for their music. “My dream essentially was to try and bring back a bit of that innocent nineties touch. And to mix traditional Portuguese music with metal”, Gaspar explains.

With influences ranging from Bathory via Samael, Tiamat, Paradise Lost, Fields of the Nephilim, Cradle of Filth and Dead Can Dance to even Van Halen or Mötley Crüe, Seventh Storm are only just embarking on a journey across the wild and wondrous waters of heavy metal history. And while not a concept album, “Maledictus” – graced by an atmospheric painting from Victor Costa – is tied together by a strong sense of pain and anger, paired with a flickering hope of forgiveness for our lives.

Recorded at Dynamix Studios in Lisbon in May and October 2021, with mixing duties handled by icon Tue Madsen, Seventh Storm completed their debut within a year after Gaspar’s departure from Moonspell – a demonstration of sheer willpower. He remembers: “On the 25 of April of 2021 I announced my new band – the day the Portuguese dictatorship ended back in 1974. We felt it would be a strong message to announce the band on that date.” For him and his band of buccaneers alike, “Maledictus” is a new beginning. “It’s our grand stand,” he says. “This is us showing that not all is lost. That our past was not in vain. We are here to stay!”

So cast off, and watch out for the first single and the pre-order of ‘Maledictus’ that will start in a only a few weeks from now. 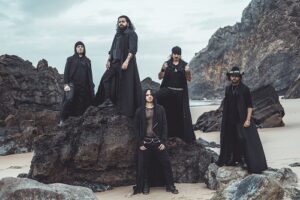