Hailing from Greece, experimental/progressive black metal outfit Aenaon, comprising members of Varathron and Katavasia, has inked a record deal with Agonia Records. The band plans to end the five-year hiatus that followed 2016’s “Hypnosophy”, by putting out a new album of “heavily textured black metal”.

“Through our 15 years of bizarre existence, we have collaborated with great musicians, amazing visual artists and passionate underground labels. We feel like this album marks a different chapter after a long hiatus and what a better way to start than signing with one of the best extreme metal record labels out there,” comments Aenaon‘s Achilleas C. “Agonia Records has an amazing diverse roaster of well known and respected dark artists and we are very proud to become part of the family.”

Serving as the mastermind behind Aenaon, guitarist/bassist Achilleas C holds ties to noteworthy Varathron – alongside drummer Haris – and Katavasia – together with vocalist Astrous. The line-up is completed by saxophonist Orestis Zyrinis.

The name Aenaon derives from the Greek word “Αέναον,” which translates to “the Eternal”. The band’s history dates back to 2006 and encompasses, on top of several smaller releases, three studio albums; the debut, “Cendres et Sang” (2011), the lauded, “Extance” (2014) and the most recent, “Hypnosophy” (2016). 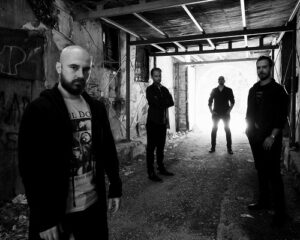