When one finds themselves at the proverbial crossroads – face to face with the Devil himself – who wouldn’t choose the left hand path? Honestly, evil is too enticing, too strong, and Hell has the best music anyway. Hailing from Portland, Oregon, heavy metal mongrels Bewitcher made their pact with Lucifer years ago, and have been walking the dark path ever since.

Bewitcher are unveiling the front cover for their upcoming Century Media Records debut and 3rd studio album, “Cursed Be Thy Kingdom”, which was done by Paolo Girardi (Power Trip and many more). “Cursed Be Thy Kingdom” is set for a release on April 16th, 2021. Keep your eyes and ears open for a new song shortly. 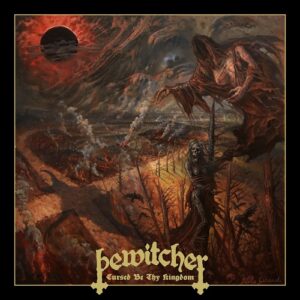 M. von Bewitcher (vox & guitars) comments: “We summoned the mighty Paolo Girardi to deliver us a cover that visually depicted a few of the lyrical themes within the album. It has a Renaissance-era vibe to it, but it also incorporates some nods to the band’s past. It’s filled with all kinds of omens, harbingers, and all that cool dark, evil looking shit that is a necessity in any heavy metal album cover of merit! Get your dose of black magic on April 16th, when ‘Cursed Be Thy Kingdom’ is finally turned loose upon the world!“

Recorded at The Captain’s Quarters in Ventura, California by Armand John Anthony (Night Demon), and mixed by Cameron Webb (Motörhead, Megadeth), “Cursed Be Thy Kingdom” is a powerhouse, heavy-metal-rock-’n’-roll record forged in the white hot fires of Hell.

Rock ’n’ roll is the Devil’s music, and through “Cursed Be Thy Kingdom”, Bewitcher invites you to join them at the crossroads, drink from the chalice of rock ’n’ roll, then ritualistically sell your soul to the dark lord himself. M. von Bewitcher puts it best, “The Devil is always ready to make the deal…” 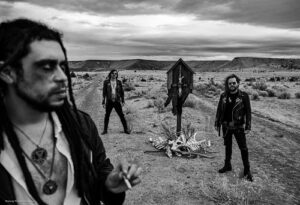