French black metal pioneers Seth will release a new album via Season of Mist in the first half of 2021. The band has furthermore unveiled a teaser of the upcoming record, which can be viewed at the Season of Mist Youtube Channel at https://www.youtube.com/watch?v=kKsmod9MwT4&feature=youtu.be&mc_cid=34a4d698d8&mc_eid=abe0b6e762&ab_channel=SeasonofMist

The band comments: “We belong to the label’s very first bands as our debut album ‘Les Blessures de l’Âme’ was released by Season of Mist back in 1998. Today, more than twenty years after, we proudly start a new path together again, to disclose album VI, rising from the ashes of the true genesis of Seth.”

Seth’s first full-length ‘Les Blessures de L’Ame’ was released by Season of Mist in 1998 and soon it became one of the cornerstones of the French Black Metal scene. The band fulfilled a pioneering role as they were the first to use French lyrics in black metal. With this critically acclaimed record, the black metallers grew a solid, international fan base and got noticed overseas shortly after.

After participating on the MAYHEM cult tribute album ‘Originators of the Northern Darkness’ alongside IMMORTAL and BEHEMOTH, the band inked a two-release deal with Osmose Productions. The second full-length ‘The Excellence’ featured a contribution from Fenriz (DARKTHRONE) who wrote the lyrics for the song ‘Let Me Be The Salt In Your Wound’.

A third album titled ‘Divine-X’ was recorded in 2002 at the Excess Studios in Rotterdam (EPICA, AFTER FOREVER, SINISTER). This full-length demonstrated the ability of the band to mix gloomy and violent atmospheres. The record received extensive coverage from the international metal press at the time.

Returning to the Netherlands to record the fourth album ‘Era-Decay’, two new members joined the ranks of Seth: vocalist Black Messiah and guitarist Cyriex. Afterwards, the band was invited to play at the prestigious Inferno festival in Norway in 2005.

A long hiatus followed, until Seth returned in 2011 to play an exclusive show in Germany with the legendary band BETHLEHEM. The band re-joined the ranks of Season of Mist, eventually releasing ‘The Howling Spirit’ and going on a European tour with cult death metallers PESTILENCE. Several appearances at major festivals followed, including Hellfest and Graspop Metal Meeting and a Canadian headliner tour.

In the meantime, Seth have recorded a new album which will see the light of day in the first half of 2021 via Season of Mist. 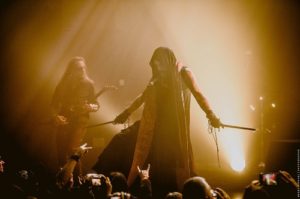