Israeli progressive metal wizards Scardust have released a music video for ‘Addicted‘ , the track is taken from their new album ‘Strangers‘, which will be released on October 30th, 2020 via M-Theory Audio. The YouTube video can be viewed here: https://youtu.be/lxJsPhHHntQ

“In Tantibus II we met the one who decided to disconnect from reality into her own mind, and now in Addicted we find that there is someone who cares about her. She tries to show her the meaning of addiction, and explain to her that she is running away instead of facing reality. This video shows us the passage between the worlds of reality and addiction. The character in Addicted can walk freely between those worlds, she is neither stuck nor fighting to get out. The choir represents the way out, and the string quartet represents the way in.”

Scardust has also launched the “Mist Cover Challenge”, an invitation for fans to play or sing along with the final minute of the new song “Mist”, the closing track of “Strangers”, with the chance of winning a deluxe package of signed CD and vinyl copies of “Strangers”, a new design Scardust t-shirt and guitar picks. Join the challenge here: https://scardust.co/mist-cover-challenge

Vocalist Noa Gruman explains, “Strangers deals with the concept of being estranged. Written from multiple perspectives, it explores the ways in which people can be estranged from one another, from themselves, from society, from their loved ones and even from their own subconscious. After the overture, which introduces musical themes, the album separates into two parts. Every song from the second part is a mirror image of a parallel song in the first. Each pair of songs tells the story of a pair of strangers. They can be played together as a standalone piece, as individual songs or as part of the album, whatever the listener’s heart desires.” 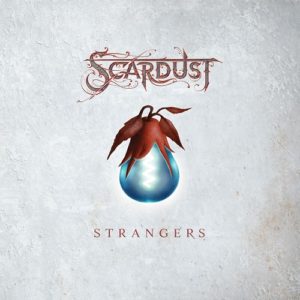 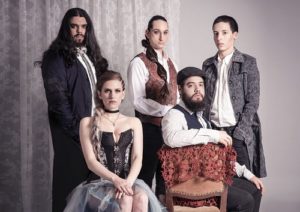 “Strangers” was written and composed jointly by singer and band leader Noa Gruman and Orr Didi, who also collaborated with Gruman on “Sands of Time” – which was hailed by Prog Magazine as “extraordinary” – and Scardust’s debut EP “Shadow.”

The recording sessions for “Strangers” began in the winter of 2020. From there, the band was faced with the outbreak of COVID-19, which brutally destroyed their recording plans, ironically forcing them to continue the process in isolation, estranged from one another, in their individual home studios.

The album’s guest of honor is Patty Gurdy, a fantastic German folk musician and a dear friend of the band. The band’s relationship with Patty began two years ago after mutual admiration led to a guest appearance at a Berlin concert by the band. Friendship blossomed into a combined Scardust/Patty Gurdy UK tour in 2019 and now culminates in the track “Concrete Cages” on this album. Inspired by Patty’s unique playing, singing and character, this song was tailored by the band especially for her. They planned to record, perform a show and shoot a video together in Tel Aviv, but unfortunately, just days before Gurdy was due to travel, all flights between Germany and Israel were banned, forcing them to change their plans and adapt to the new reality. Eventually, Gurdy recorded in her home studio in Germany with support by Gruman via video chat from Israel, in tune with the times.

“Strangers” also continues Scardust’s tradition of featuring lush and expansive vocals by the Hellscore choir. Gruman founded Hellscore for the recordings of the band’s previous album, and they have returned to reprise their role on “Strangers.” Since forming, Hellscore have also recorded and performed with Amorphis, Therion, Ayreon, Orphaned Land and many more.

In addition, the album features the vocals of England’s prestigious Westbrook Hay Prep School Chamber Choir, who have performed at London’s famed Royal Albert Hall. Says Gruman, “Recording the Westbrook Hay Prep School Chamber Choir led by Chris Wagstaff was one of the highlights of the recording process for me, and delivered a magical moment on the album. I flew to the UK especially to conduct and record them with Tony Wilson. The choir, made up of about 40 kids between the ages of 8 and 11, had prepared with great diligence and dedication, and their wonderful voices add magic to the song ‘Huts,’ which speaks about the wish to return to a simpler way of life.”

Israel’s leading progressive metal group, Scardust has performed at such major festivals as Ramblin’ Man Fair (UK), Metaldays (Slovenia) and Midi (China). In addition, the band hosts the annual “Scarfest” event in their home country, where they’ve also appeared alongside the likes of Therion, Epica and Symphony X.