Listen to an excerpt of Howling Giant’s track “Masamune” at https://soundcloud.com/ripple-music/howling-giant-the-forgemasamune-excerpt

Instead of the typical approach with two bands contributing stand-alone sides of a record, Howling Giant and Sergeant Thunderhoof wanted to write an album that was thematically and sonically cohesive. The result is a 40-minute piece of ambitious songcraft created by two riff-prog legends leaving another impressive mark on the heavy rock landscape. The album artwork was designed by Jane Swettenham.

‘Turned To Stone Chapter II: Masamune & Muramasa’ will be issued on August 7th via Ripple Music.Tracklist: Side A – Howling Giant “Masamune” (19:42) Side B – Sergeant Thunderhoof “Muramasa” (21:13) 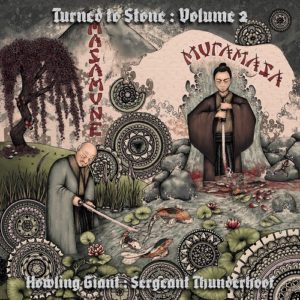 Howling Giant comment: “We were so stoked to do the split with Sergeant Thunderhoof. After talking with those guys we both agreed that we wanted to do something a little different. Instead of the typical approach, where two bands each record a side of a record and the music remains completely independent, we wanted to create a record that feels like one complete thought performed by two bands, rather than two mini albums crammed onto a shared vinyl record. We decided to tell the story of two legendary Japanese sword smiths, Muramasa and Masamune, in which these they have a contest to determine who the superior sword smith is. They each crafted a blade of masterwork quality and held their contest at the rivers edge. We thought it would be cool to each record a 20 minute song telling the tale from our chosen sword smiths perspective. We then shared melodic ideas with the dudes in Sergeant Thunderhoof to insure a cohesive flow throughout the entirety of the record.”

Sergeant Thunderhoof add: “I don’t think we realised what an undertaking it would be to write and record a continuous 20 minute epic. We were a little apprehensive at what the response would be from Howling Giant and Todd and Jadd at Ripple. Luckily for us, everyone seemed to love it and a short time later, Howling Giant submitted their half which was a revelation. I have to say that the final product is something i’m really proud of. I really do see this as a fully realised concept LP rather than just a split release. I’m proud of what both bands have done and I hope other people find it as rewarding as we did.”