The 80s live again with the traditional styled Canadian heavy metal: “On The Hunt” Out October 4. 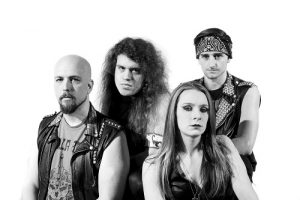 Inspired by legendary pillars of heavy metal such as Iron Maiden, Judas Priest, The Scorpions, and Rush, Iron Kingdom is well known for their energetic and electrifying stage presence, as well as intricate musical melodies that bring listeners back to a time when the genre was in its prime.

Now they are back with a new album “On the Hunt”, which is sure to remind people of the glory days of metal. With two new members in the lineup, there are new inspirations and approaches in the music while maintaining the traditional sound. They hope the album is well received by fans: “We’re believing fans can expect the new record to be a lot more traditional in style, more accessible with a lot more rocker tunes, lots of catchy melodies and speed metal riffs, shorter songs, more packed with action, as opposed to the previous album with long epic passages. We wanted this record to include lots of great live tunes we can carry in our set for years to come!”

The nine new tracks are fun tunes that translate well into a live setting, which is paramount for Iron Kingdom who take great pride in their live show. Fans of the classic including Iron Maiden, Judas Priest, Queensryche, and Helloween will revel in Iron Kingdom who put a modern spin on traditional heavy metal.

“On The Hunt” is due out October 4, 2019 and available for pre-order via the band’s online store. 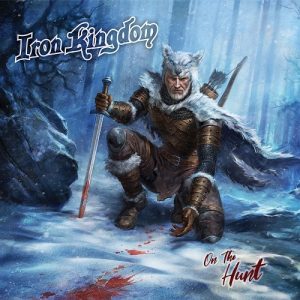 BIO: Inspired by legendary pillars of heavy metal such as Iron Maiden, Judas Priest, The Scorpions, and Rush, Iron Kingdom is well known for their energetic and electrifying stage presence, as well as intricate musical melodies that bring listeners back to a time when the genre was in its prime.

Formed in Surrey, Canada, in June of 2011, Iron Kingdom‘s intent was to fill the gap of bands that are heavy, but not extreme, melodic but not mainstream, technical but approachable. ‘Curse Of The Voodoo Queen’ was released on Dec 14, 2011, and the band took the opportunity to tour western Canada, along with an appearance on the CTV Show, Canada’s Got Talent (viewership of 1 million on that episode). With the debut album finishing its cycle, the group decided it was time to record a new album, and by April 26, 2013, ‘Gates Of Eternity’ was released. Garnering strong reviews and attention from around the world, Iron Kingdom was invited to perform at Germany’s Keep It True XVII festival.

Following this massive milestone, Iron Kingdom set out to pursue as many opportunities as they could spending some serious time on the road through Canada in 2013, Europe in 2014, followed by a tour in the USA with California’s Night Demon. The band had created some major momentum and Iron Kingdom were spreading their moniker far and wide in support of the first two releases.

On July 30, 2015, Iron Kingdom released not one but two more albums, ‘Ride For Glory’, their 3rd full-length album, as well as ‘Unleashed At The Kraken (Live In Seattle)’, an exclusive live E.P. recorded on a previous tour. The band set out on the road again in support of the two new releases. The tour was unfortunately riddled with many trials, including a vehicle accident that almost killed the band members. Life on the road continued, including a massive North American tour in 2016, as well as a tour in Brazil in a supporting slot for former frontman of Iron Maiden, Blaze Bayley.

As of 2019, with a new lineup and a new album ‘On The Hunt’ on its way, Iron Kingdom will once again be ready to take the world by storm and aid in the revival of the mighty and classic sounds of Traditional Heavy Metal.