Hear ye, hear ye! Silent shadows have been reigning over the lands of the Twilight Kingdoms for a while for some very special reason… Diligent dwarves, eager elves, mighty mages and the entire realm has been dutifully gathering resources over the past few months in support of Swedish adventure metallers Twilight Force crafting their new opus »Dawn Of The Dragonstar«, the band’s follow-up to the much-loved »Heroes Of Mighty Magic« (2016). Once again recorded in the group’s own Twilight Forge, the album will not only present ten new stories to their loyal Knights Of Twilight’s Might, but also introduce the companions’ new minnesinger, Allyon, who was called upon by the prophecies to join the fellowship in 2018.

The band lets be known, “Lo and behold! We are beyond elated to finally unveil the third opus of Twilight Force: »Dawn Of The Dragonstar«. The absolutely magnificent artwork by the mighty Kerem Beyit once again brilliantly captures the adventurous and magical world of the Twilight Kingdoms; and a sparkling adventure it shall be indeed. »Dawn Of The Dragonstar« will be unleashed upon the realm of the living on August 16th, so we humbly ask for your patience for just a little while longer. In the meantime, practice your battle cries, sharpen your swords, and dust off your spell tomes. Make sure you are prepared to join and experience our triptych adventure.” 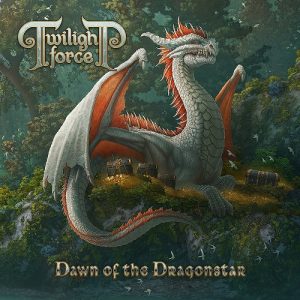 More details shall be revealed very soon, so keep a watchful eye on the horizon for further tidings on »Dawn Of The Dragonstar«.

After wandering across several foreign shores to proclaim the illustrious tales of their two previous records alongside minstrels such as SABATON, ACCEPT, SONATA ARCTICA, and DRAGONFORCE among others, Twilight Force will of course be lying in wait to claim the universe’s playgrounds. A few European festival gatherings have already been announced, more to follow soon…! 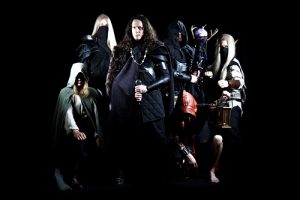