»Renegades« was recorded and produced during September 2018 until March 2019 by the band itself and swedish producer Robin Leijon and it is the first Equilibrium album to feature Skar with his clean vocals and Skadi Rosehurst on synths.

Mastermind René Berthiaume states: “We can’t wait to return with new music after 3 years. Musically as well as lyrically “Renegades” has definitely become our most uncompromising and personal album to date. We are especially proud of the introduction of our new members: Skadi has been one of the driving forces behind Equilibrium for many years now. She has mainly been responsible for artwork, designs, musical and lyrical input and will now support us live on the synths in a few months’ time. Skar, on the other hand, has become a completely new part of the Equilibrium family. Some of you might already know him from his work on YouTube as Skar Productions. On the current album he gave us outstanding additional (clean) vocals as well as bass tracks and the logical consequence was that he joined us permanently. So there’s a lot going on with us right now. At the same time we want to say a big thank you to Makki who smashed the bass live for us during the past 2,5 years. You rock! We love to develop further; standing still would be our inner death. So you can be curious about what’s coming!” 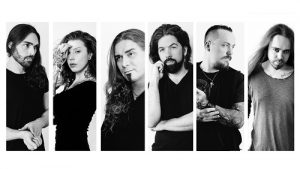