Ukrainian doom proggers Stoned Jesus released two new songs last year, CON and Porcelain, but now it’s time to kick it off! Today, the trio Stoned Jesus is treating the world with the atmospheric blues of ‘Thoughts and Prayers’ – a somewhat fitting title to their current situation.

And with this realease, the band treats us with a beautiful music video which can be viewed via the official Season of Mist channel at https://www.youtube.com/watch?v=H6kDj-HlQdg&ab_channel=SeasonofMist

But it’s not just the song ‘Thoughts and Prayers’ that’s being released today. Serving as the first half of the bigger song cycle, ‘Father Light’ is the first full-length of new material from Ukrainians in five years and will be released upon this world on March 3rd, 2023. With its deep lyrical themes and genre-bending music content, ‘Father Light’ serves as an introduction to the new chapter of Stoned Jesus lore.

Lead vocalist and guitarist Igor comments: “I wrote these songs mostly in 2019, we worked on them through 2020, recorded them in 2021 and were ready to release them in 2022…and finally the first batch of them is coming out as ‘Father Light’ in 2023! So this is neither our “pandemic” nor our “war” record, this is something I was really obsessed about many months ago – climate change, media numbness, corporations’ impact, social divisions… But revisiting these issues years later shows that they’re still important and this is still something that resonates with us – and hopefully will resonate with many other people, too. Musically I think this is our most diverse and mature record to date, but there’s a good dose of oldschool Stoned Jesus there too! Anyway, enjoy this one and fingers crossed for 2024′ release of ‘Mother Dark’ – the moodier, more personal, more experimental sister album to ‘Father Light'”

Stoned Jesus is also well known for their song ‘I am the mountain’ who managed to reach a whopping 15 million views on Youtube. FFO: Elder, Porcupine Tree, Mastodon. 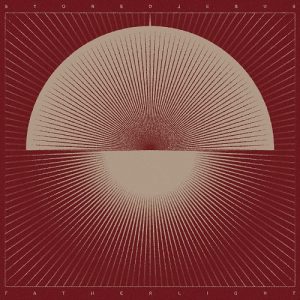 Stoned Jesus recently announced their appearance on the mighty Hellfest of 2023! More information on tours/festival for 2023 will be announced on a later stage.

Ukrainian prog-stoner trio Stoned Jesus held their first rehearsal since the Russian invasion in the middle of July 2022. It was a moment the band dubbed as “surreal” and justifiably so — the regular ritual of band practice was made impossible by the war. The members of Stoned Jesus — Igor Sydorenko (vocals/guitar), Sergii Sliusar (bass) and Dmytro Zinchenko (drums) — captured the moment for their social media channels. A broad smile of defiance and satisfaction can be seen on their faces. Regardless of the senseless havoc and destruction reaped upon their homeland, Stoned Jesus would play on. It was the resumption of a music career temporarily thwarted but not defeated by evil.

Since 2009, Stoned Jesus has served as one of Ukraine’s leading forces in heavy rock. Sydorenko, a veteran of the Ukrainian music scene, formed the band after stumbling upon some heavy and angry riffs that would become the song “Occult.” He fed off his Black Sabbath and Led Zeppelin influences and was soon turned onto Electric Wizard and Sleep, two bands who mastered the art of bold, lurching heaviness, thus creating a sonic template to abide by.

The band was initially dubbed “ Stoned Jesus from the Outer Space” but shortened to the much crisper Stoned Jesus. The name was trimmed down out of necessity — Sydorenko wanted to legitimize the band immediately. “I realized that this may cause some problems,” he told the Psychedelic Baby webzine in 2010. “Some people wouldn’t take our music seriously, then. I don’t mind jokes and having fun, but music is always the most serious thing for me.”

Two demos ensued before Stoned Jesus’s debut LP, 2010’s First Communion. Recorded in two hours, First Communion was a promising offering that dove headlong into the world of heavy stoner rock, with three songs going over the ten-minute mark for hypnotic effect. The album eventually saw a proper reissue in 2020, introducing it to a new group of fans. Seven Thunders Roar followed in 2012 and included “I’m the Mountain,” a 16-minute epic jam that has since become a live staple. The album also introduced a bevy of acoustic guitar and softer vocal approaches from Sydorenko.

The Harvest came next in 2015, deftly transitioning Stoned Jesus from sludge into new terrain, including alternative and progressive rock. This is a credit to Sydorenko’s evolving songwriting style and desire to never allow Stoned Jesus to repeat itself. “It works brilliantly for the likes of Motörhead or AC/DC, but we’re not that legendary yet,” he told Outlaws of the Sun webzine in 2015. “So, let’s experiment, shall we? Let’s play with the genres, the sound, the song structures, the melodies, the timings — yes, my favorite trick!”

Pilgrim came next in 2018, which until now, has been the band’s career-defining moment. Stoned Jesus’s original plans were to record its follow-up in 2020. That, of course, was sidelined by the pandemic. The band then entered Spivaki Records in Kharkiv in July 2021 to record nine songs at 75 minutes. Two-thirds of the material was mixed and mastered before the invasion, leaving the final run-time of six songs at 43 minutes.

The result is Father Light, the band’s first for Season of Mist. The album catches Stoned Jesus in full bloom. The foundational elements of Stoned Jesus’s sound remain (fuzzed-out rock, driving bass lines and maximum groove) and are once again augmented by the combination of Sydorenko’s gentle clean vocals and hook-laden chorus choices, along with an array of ornamental guitar melodies. And, in true Stoned Jesus fashion, the journey is often the reward: The cuts on Father Light expand and shift — all the while, the band’s trademark heaviness serves as the guide.

Stoned Jesus subsequently resumed live activity in July 2022 with European festival dates and runs with countrymen (and labelmates) Somali Yacht Club and then VOVK. The shows provided the band the opportunity to air two of the songs that would end up on Father Light: “Con” and “Porcelain.” Moreover, the dates were an outlet for the band to connect with waiting audiences who supported their music and cause of raising money to help those impacted by the war.

The idea that music is the ultimate escape has never rung truer in light of what happened to Ukraine in 2022. The prospect of brighter days lies ahead, making the Father Light album title even more appropriate.

As 2022 drew to a close, the members of Stoned Jesus posted their final message for the year, epitomizing their resilience and optimism: All the missiles in the world can’t destroy freedom. Nothing will stop truth. 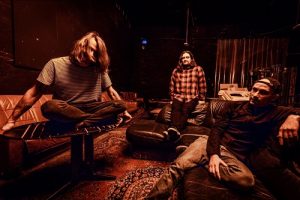