I think I have always been interested in music, when I was eight or nine my older brother had Iron Maidens Rock In Rio on DVD which influenced me a lot! Also, seeing Kiss and Europe on TV was a big deal! I was probably around the same age.

Oh, too many to mention but Pink Floyd, Dissection, Bathory, Thin Lizzy are some of my favorites. I also love stuff like John Fogerty / CCR, Country etc..

I play most of the standard instruments, I learned the basics at a very early age but gave it up rather quickly. Then, at the age of 14 I picked up guitar again and slowly started to learn more about drums etc. I had lessons in school from age 16 to 18 and no, they did not expect it, it all came naturally. I rarely take lessons anymore, I check out some Youtube-videos from time to time to learn more jazz, though..

Yes, I am very much into blues players (everything from B.B King, David Gilmour, Gary Moore, SRV, Jeff Beck to more modern players like John Mayer) and also jazz stuff (Clint Strong, Wes Montgomery, Django Reinhardt and soooo on..) I listen to so much music that I wish I had time to have a band for each genre I listen to! Lol!

No, I work within the healthcare department and have been doing that for almost seven years now. My goal is not to live off playing music, it’s really hard to make a good living out of it. And no, I would not quit my daytime-job.

*If you could start a complete new band (something like an all star band) with other musicians on other instruments, which artists would you pick for wich instrument and why? Would you still go for a thrash / speed / black metal band?

I would NOT do anything related to extreme metal. Oh wow, what a difficult question.. Well, Imagine having Phil Lynott (or Peter Steele!) on bass / vocals, David Gilmour on guitar / vocals, Mark Knopfler on guitar / vocals, Jon Lord on keys / organ, Brian Downey on drums / percussion and maybe have Robert Plant on lead vocals. That would be seriously insane? Haha!! I would be happy to just be the guy in the background playing acoustic guitar!

‘Wish You Were Here’ – Pink Floyd, ‘Appetite For Destruction’ – Guns ‘n’ Roses, ‘Sign Of The Hammer’ – Manowar, ‘The Great Souther Trendkill’ – Pantera, and maybe Led Zeppelin’s ‘IV’. (This changes all the time.)

Because there is something for everyone on this album. Extreme metal, sing along choruses, blastbeats, clean vocals, shredding guitar solos, clean stuff – You name it! My favorite tracks are: ‘In Silence’, ‘Ensamvarg’, ‘The Great Below’ (title track), they just stand out in a exceptional way. 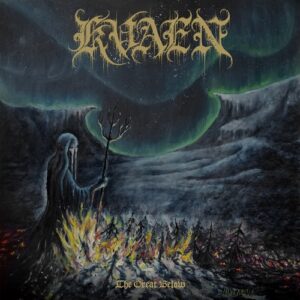 *Is there a chance that you will promote these songs through live concerts? If so, would you prefer small clubs or big festivals? And is there a chance we can see KVAEN in Belgium?

Yes, we will promote most of the new songs live. I prefer both, depending on my mood! Hehe! And yes, we will come to Belgium for sure!