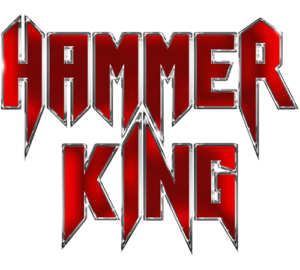 In the name of thy majesty – heavy metal powerhouse Hammer King has arrived!

In the spirit of old school power metal, Germany’s up-and-comers Hammer King have gathered to set fire on their new album Hammer King (out June 11 via Napalm Records)! Ever since Hammer King burst onto the scene in 2015, they have proven themselves as an unstoppable force. Hand-picked by thy majesty, the Hammer King himself, the band consists of former ROSS THE BOSS vocalist Titan Fox V and former SALTATIO MORTIS drummer Dolph A. Macallan, alongside Gladius Thundersword on bass and Kleveland’s most timeless lead guitarist: Gino Wilde. Hammer King keeps it heavy with speedy riffs, energic grooves and fist-pumping choruses, devoting their existence to the one and only myth of the godly Hammer King! The new self-titled album starts off with blasting drums and brisk guitars on “Awaken the Thunder”, with frontman and guitarist Titan Fox V showing off his incredible vocal range, whereas tracks like “Atlantis” prove Hammer King’s ability to write catchy and memorable choruses. Hammer King tells the lore of the Hammer King himself, a wrathful and mighty war god, who is praised in tracks like anthemic “Baptized by the Hammer”, energetic and double-bass driven “In the Name of the Hammer” and the hard-hitting “Hammerschlag” featuring the legendary Gerre from TANKARD, Isaac from EPICA and the almighty The Crusader (WARKINGS). Hammer King will be available as a deluxe box edition including, as well as on gatefold vinyl amongst others. Kneel before the king of kings, the Hammer King! 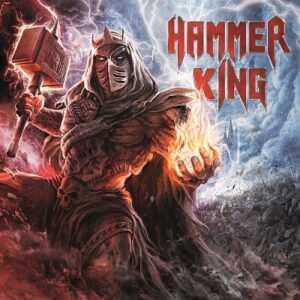 Tracklist: Awaken the Thunder / Baptized by the Hammer / Onward to Victory / Hammerschlag / Atlantis (Epilogue) / We Are the Kingdom / Into the Storm / Ashes to Ashes / In the Name of the Hammer / King of Kings / Holy (Outro)