Three years since their latest and highly acclaimed album, Purgatorio, Gothenburg heavy power metal overlords Manimal have announced a brand new studio record for the Fall of 2021 through AFM Records.

Despite the band‘s loyalty to traditional heavy metal influences, Purgatorio was a prime example of modern and trend-setting power metal characterised by musical enthusiasm, exceptional talent and new ideas. Following their latest magnum opus, 2021 will see the Swedish four-piece take their outstanding qualities to the brink of perfection: Manimal’s fourth album, with a yet unknown title, will showcase their wide range of a heavy as hell sound, and one that will most likely win over the true hearts of both the oldschool and modern metal fan!

To shorten your wait for the album release later this year, Manimal have just unleashed a first sneak peak with the blistering single “Forged In Metal“! While the track won’t stray away from the band’s heavy metal roots, it packs the extra punch and comes as a fresh adrenalin infusion. Stream

“The whole idea was to write a straightforward metal hymn with an irresistible “fist in the air” chorus”, says songwriter and guitarist Henrik Stenroos. Vocalist Samuel Nyman adds:

With this first album appetizer, Manimal indeed succeeds to celebrate heavy metal all along the line. Enjoy their brand new video clip for “Forged In Metal“ here: https://www.youtube.com/watch?v=Ol0Lj8SHCHc&ab_channel=AFMRecords 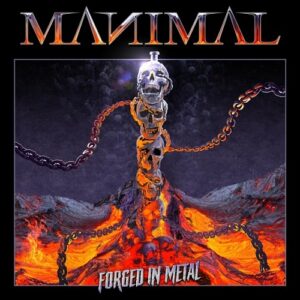 It seems Manimal’s goals have always been to write songs that they love and believe in. “The challenge is to make a song with strong hooks without being too predictable. It`s just a bonus when we realize that people around the world seem to have the same good taste in music that we have,” frontman Samuel Nyman once said.

Inspired by Rob Halford, Geoff Tate or Michael Kiske among others, Nyman‘s voice oozes aplomb and pure passion, blending perfectly with the intelligent songwriting, courtesy of guitarist Henrik Stenroos, a true riff icon whose hooks and licks provide the foundation for Manimal’s songs. Equally important for the group’s typical flair are drummer André Holmqvist and bassist Kenny Boufadene. Holmqvist has a tight, powerful drum style that comes surprisingly close to paragons such as Tommy Lee and Mike Portnoy while Boufadene is also in charge of mixing Manimal’s new album and produces his band’s videos at his Studio Meltdown in Sweden.

Blessed with such diverse talents and like all of their previous albums, Manimal once again produced the upcoming record themselves. “Mainly because we like to have full control of the production. We’re control freaks to the bone and the thought of putting our creations into the hands of an external producer simply scares us,” Nyman confessed earlier.

”I’m really proud we’ve manage to create yet another great album together.” Henrik Stenroos continues. “And it’s been a team effort indeed. All four of us has put so much soul and effort into everything from song writing to recording, with the result of a really heavy and all through awesome sounding album without any fillers what so ever. The fans of our previous works will not be disappointed.”

One can be sure, with this just released first album single, Manimal manages to leave us with a hunger for more. And with many more album details, news and album singles to follow in the months ahead, Autumn 2021 couldn’t be here soon enough! 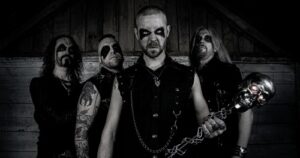