Dool and Secrets Of The Moon have published new live shows for their previously announced Eurpean “Ascent to Summerland Tour” that had to be postponed due to the global pandemic. Please find all currently valid dates for spring 2022 below. On further news, the two co-headliners will be joined by Spanish doom rockers CARONTE.

For questions and updates regarding already purchased tickets, the booking agents kindly ask ticket holders to please get in touch with their local venue and ticket seller.

Dool comment: “We had to abandon our original tour-plans with heavy hearts but there was simply no other choice”, relate the Dutch. “Yet with an unbroken spirit, we are now glad to be able to present the new dates for our European shows alongside Secrets Of The Moon and joined by Caronte. We wish you all a fiery return of the light. Onwards to brighter days!” 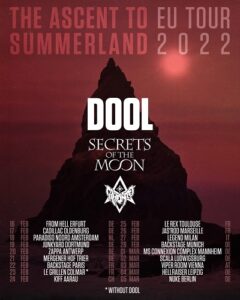 Ever since rising from the ashes of the THE DEVIL’S BLOOD and ELLE BANDITA in the old Dutch harbour city of Rotterdam in the year 2015, Dool have left their gloomy mark on the European dark rock scene.

This pack of wildlings has gathered and set its collective goal to achieve creative evolution and spiritual ascension under the name of Dool, which is derived from the Dutch word for ‘wandering’. After some soul-searching through melodies and rhythms, their debut album “Here now, There then” was released in 2017 and immediatly struck gold receiving “album of the month titles” in the renowned German magazines Metal Hammer and Rock Hard as well as the “Best Debut Album 2017” award from the former – among other high praise from around the globe including from Vice (US), Aardschok (NL), and De Volkskrant (NL).

This instant success was followed by Dool embarking on extensive touring and accepting invitations to prestigious festivals such as Wacken Open Air (DE), Graspop (BE), Hellfest (FR), Metal Days (SL), Lowlands (NL), Fortarock (NL), Wave Gotik Treffen (DE), Rock Hard Fest (DE), Stoned from the Underground( DE), Metalitalia Festival (IT), and North of the Wall (UK) among many others.

In 2019, Dool released the “Love Like Blood” EP, which featured the Dutch’s take on the eponymous KILLING JOKE classic that had already become a crowd favourite in their live shows.

With their sophomore full-length “Summerland” released on April 2020, the shooting stars around charismatic guitarist and singer Ryanne van Dorst confirmed their early headstart and garnered even more accolades in the media. “Summerland scored more “Album of the Month” awards in German Rock Hard (10/10) and Sonic Seducer magazines as well as a #2 soundcheck positions in Metal.de, Metal Hammer (DE) and another #1 in the Polish edition – with glowing reviews on both sides of the Atlantic.

Yet due to the global pandemic, Dool were prevented from premiering their album on the main stage of the legendary Roadburn Festival in Tilburg, Netherlands as well as going on tour. Given the high level of anticipation, “Summerland” is more than worth the wait and Dool remain defiant and are determined not to let this masterpiece slip through the cracks. Get ready for early 2022 to finally see those fantastic new tracks new live on stage! 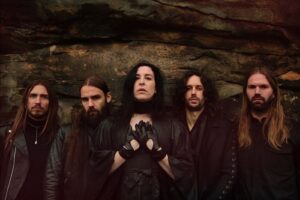 With their latest release “Black House” (May 2020), Secrets Of The Moon continue to evolve in the direction the Germans had taken on “Sun” (2015), which leads them further away from their black metal roots into a unique realm of thir own fascinating blend of alternative music and dark rock with a punch.

“Black House” has also been tagged such with “goth rock” and “post punk” among other attempts to nail their ecclectic style down and been referenced to such giants as ALICE IN CHAINS, FIELDS OF THE NEPHILIM, and later TIAMAT. Although there is no agreement into which drawer the new era Secrets Of The Moon should be placed, the Germans display a high level of self-confidence in their music, which shows in catchy tunes with subtle twists, blackened grace, and a furious elegance which at times hints at their heavier past.

“Black House” was recorded in The Church of Sound Studio owned by guitarist, engineer and producer Michael “Ar” Zech over the course of almost a full year. During that time, the quartet welcomed eminent guests such as JARBOE and members from EMPYRIUM, THE RUINS OF BEVERAST, DARK FORTRESS, and ENEMY OF THE SUN, who all contributed to the individual vibe of the song that they participated in.

Secrets Of The Moon are more than ready to hit the road and rattle Europe, but the German dark rockers had to delay their planned tour due to restrictions in the course of the global pandemic. Expect these vicious live beasts to be more than hungry when they are finally unleashed in early 2022! 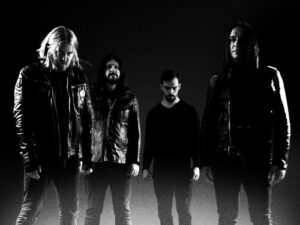