Greek metal masters Nightfall are now unleashing the first track of their brand new opus ‘At Night We Prey’. The new offering is set for release on March 05, 2021. ‘Darkness Forever’ can now be viewed via the official Season of Mist YouTube channel at https://www.youtube.com/watch?v=eYKNCKC21kw&feature=youtu.be&ab_channel=SeasonofMist.

The new album is now available for pre-orders at https://shop.season-of-mist.com/catalogsearch/result/?q=nightfall

Vocalist Efthimis comments on the track: “This song was originally inspired by Isaac Asimov’s nouvelle Nightfall. It is called ‘Darkness Forever’ because of its analogy to what one experiences when in deep depression. Hope seems to be nowhere near and help from others is never enough to bridge the gap between shattered psyche and real world. Incapacity to communicate this harsh condition, to explain what all is about, is suffocating. And as all beings struggling to breathe, reactions are neurotic and violent.”

Nightfall have furthermore revealed the cover artwork and album details of ‘At Night We Prey’. 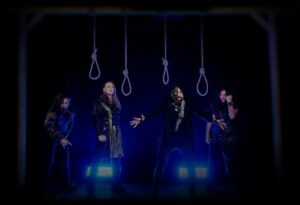 It has been seven long years since the world was last blessed with new music from the melodic blackened death metal stalwarts of Nightfall. While the band has been absent from the scene since the release of 2013’s Cassiopeia, their legacy has not been forgotten. Comprising the holy trinity of Greek metal – along with ROTTING CHRIST and SEPTICFLESH – Nightfall was the first extreme act in the country to sign an international deal, introducing the world to the burgeoning Mediterranean scene in the early 90s. Now, the band is plotting a triumphant return with At Night We Prey, the darkest and latest chapter of Nightfall’s already storied career.

During the first decade of Nightfall’s lifespan, the band headlined stages across Europe. Thereafter, went on to dominate international festivals such as Brutal Assault, Sonisphere, and Wacken, the latter of which the band solidified their legacy as the first ever Greek band to earn an envied spot at the renowned festival. The band eventually made the decision to switch to a studio act before they went completely silent. When reflecting upon the sudden disappearance after a steady rise from the underground, vocalist and founding member Efthimis Karadimas explained that it was due to an all too familiar beast – depression. “It’s because of depression that kicked in as early as mid-00s. I can write for hours and get into details about stuff gone wrong or mistreated situations, but the basis of all discouragement to move on has been depression and the effort required to get over it.” Despite the dark days, Karadimas did not abandon music entirely, moving on to form THE SLAYERKING, a gothic doom metal band that has released two agonizing full-length records between 2016-2019.

Alas, the abrupt departure of the band was not the final “goodbye” as Nightfall has been reinvigorated with a new lineup and coveted deal with Season of Mist. Karadimas has reunited with original Nightfall guitarist Mike Galiatsos, who helped define the band’s sound during the early years. With the addition of drummer and producer Fotis Benardo (ex-SEPTICFLESH) as well as guitarist Kostas Kyriakopoulos (THE SLAYERKING), the band is finally ready to release the tenth studio album At Night We Prey. In addition to the long-awaited new music, Season of Mist will also be re-issuing the band’s original albums that were produced by Holy Records back in the 90s. This is not the only news the band has to share as Nightfall has also vowed to finally perform again. “We are gonna play these live, including stuff never played live before,” says Karadimas.

‘At Night We Prey’ is a very dark and personal effort, tackling the topic of Karadimas’s battle with depression. “A beast I have experienced its teeth deep into my soul, I decided to come out and share that experience with metalheads,” Karadimas laments. “This is the least I can offer now to the big fight against depression. If we do not stop this, it will eat us all alive. Share your pain, speak openly about it. This is the only way to kill the demons in your mind.”