Band statement: “We are delighted to be part of WormholeDeath Record label, they’ve cared about us, our music, and our future as musicians. As artists, we know that this is a good opportunity to reach our goals. A Small Step in the right direction can turn out to be the biggest step of your career…Thank you WHD”

“Beyond Imagination” will be available on 27 11 2020 on all digital platforms worldwide and is avalaible for pre order / pre save. 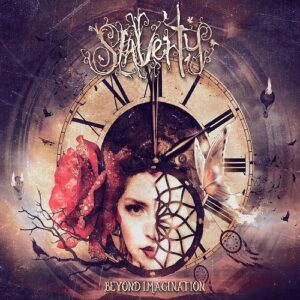 About Beyond imagination: “Beyond Imagination” is an album that invites you to open your mind and enjoy the transitions that each song has. Here you will find different stories that show how we have to fight against our thoughts and mental obstacles. Our songs were written with passion, love, and tears. It`s a wonderland, where your mind has no limits If you can imagine, you can make it real…”

Topics of the album go around the concept of “being”, both on a personal level and also of being part of a society, pointing out to what is lost and other problems, but at the same time, offering help on how to make the most of what will always be with us, our imagination, our dreams, our experiences. There is pain (The Biggest Mistake), there is madness (Dementia), the feeling of losing someone (So Close To Me), all situations that can affect us deeply, and while having them, it is important to look up to other aspects in life that will help us see our lives from another point of view. Hope. There are tracks to enjoy what we do have within our reach (Appreciate), since even when feeling lost, we must ask ourselves of what remains, as that can also be precious (The Beauty Of Life), and the feeling of being freed of anxiety or other troubles, the feeling of being open without boundaries (Be Free). With them, we might feel that not everything is lost. All tracks have a magic watermark that will help the listener to feel all songs as a single experience showing many aspects of life. We will look further and escape from reality to feel and imagine other possibilities (Unconscious Reality), wander in the unknown (Enchanted Forest), be saved from unpleasant moments and nightmares (Dreamcatcher), and to search for hope in what we enjoy from our dreams (Fairyland).

Watch “Be Free” at https://www.youtube.com/watch?v=cj2G1ietTpA&feature=youtu.be&utm_source=newsletter&utm_medium=email&utm_campaign=SLAVERTY%3A+SIGN+WITH+WORMHOLEDEATH+AND+ANNOUNCE+NEW+ALBUM+%22BEYOND+IMAGINATION%22&ab_channel=SlavertyOfficial 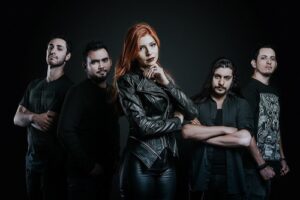 Biography: Slaverty is a Symphonic / Melodic Metal band from Santiago, Chile, formed in 2014 by lead Vocalist Karin Monserrat and by ex-Bassist and actual Manager of the band, George Ugalde. Together, they started using the name “Slaverty” to look for musicians to play on this newly metal project. Some guitarists and drummers came and went, but it was not until Juanjo Ulloa´s arrival that the band started taking it´s official path. Recommended by a friend from George, Juanjo was recruited as Guitarist for the band, bringing the perfect touch of “Metal” sound the band required. By 2015, Karin was taking singing lessons at Verónica Villarroel´s Academy, place where Matías Schwartz (who later became Slaverty´s Keyboardist and Arranger) worked as a Piano Accompanist for the Academy. By that time, the band needed a more melodic approach to enhance Karin´s beautiful voice, so the need to incorporate keyboards and more instruments became essential. After a meeting together with Karin and George, Matías took a first listen to the demo “The Biggest Mistake” and immediately decided to be part of the band to help with instrumentation and additional sounds to the project. One of the first big contacts that George had been trying to enrol since the start of the band was Oscar “Oz” Silva (Drummer) to no avail, but it was around that same time, close to when Matías joined the band, that, after many conversations, Oscar decided to be part of this project, joining Slaverty to offer a powerful and virtuoso sound. The band was almost complete. A last member was needed that could help with additional arrangements and musical production, so another guitarist was scouted, a musician that could add both delightful yet skillful solos to the team, so by Matías´ contact on 2018, Slaverty recruited Edgardo “Soco” Moraga on Guitars. At the beginning of 2020, the band releases its first single and music video”Dementia” which got an honorable mention for the film festival “Santigo Horror”. Then, the band released the lyric video for the powerfull song “Dreamcatcher” and after that they decided to release the sweet and sad ballad “Be Free”. During the quarantine of 2020, the band had a meeting with the Italian record label Worm Hole Death, and after many agreements, finally, they signed with them to release their first album called “Beyond Imagination” on November 27, 2020.