Hello, Miguel here! I think the first time I heard this kind of music was when I was really young, this was back in the very early 90’s when one could hear Def Leppard, Aerosmith and the beginnings of grunge on the TV and radio. This made me pay a bit more attention to it, and then I borrowed a cassette of Iron Maiden – ‘Seventh Son Of A Seventh Son’ from a friend, which meant I was obsessed with Iron Maiden. I quickly started listening to Metallica, AC/DC, Black Sabbath and all those artists after this.

Definitely Iron Maiden – Steve Harris is the reason I picked up the bass all those years ago. For me personally, Stratovarius, Dream Theater, Rhapsody, Blind Guardian, Angra, Symphony X, are the types of bands in this kind of music that had a big impact on me, but I also listen to a lot of extreme metal like Emperor, Rotting Christ, Behemoth, Cannibal Corpse, Nile, Obscura and others. In fact, four of us in Winter’s Verge also play in a technical death metal band!

I play bass, I’ve been playing for almost 25 years now. I first started by trying to teach myself and playing along to albums at home, before taking some lessons. My parents were happy for me to have a hobby that was constructive and that was it really! I then did a degree in music at university to get formal qualifications.

While at university I studied a lot of classical music, my main focus was on orchestration and musicology and I also played double bass/contrabasso in the orchestra. I have a big love for classical music, especially the big loud Romantic-era composers like Liszt, Wagner and others. I also studied some jazz but never got too deep into it. I still listen to a lot of classical music these days and it gives me a lot of ideas when coming up with symphonic parts, of course! 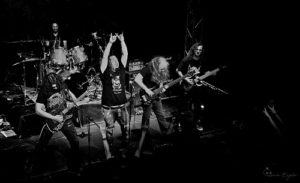 No, I also work as a lawyer (I went to law school after university). The main reason is in order to be a professional musician, it’s very difficult to make a good living just playing metal. You have to work in cover bands and be active as a teacher – I have no interest in teaching, and the idea of playing in a cover band would not work for me. If you are happy doing those things though, it’s great! I have a lot of respect for my colleagues who do that. The world really needs good music teachers and cover bands.

Music is not a hobby for me, it is a lifestyle. Almost all of my free time and resources are taken up by it. If the band were to really, really take off, and I could live off it, of course I would put 100% into it and stop working a ‘normal’ job. That’s what we all want, but very difficult to achieve.

*If you could start a band with other musicians on other instruments, which artist would you pick for which instrument and why? (Something Like an “All Stars Band”.) Would you still go for a symphonic power metal band? Or would you do something completely different?

My ‘dream project’? That’s a tricky question – a band is like a football team. You can get all the best players in the world, put them together, but that’s no guarantee it would work properly. The most important thing would be a good chemistry, understanding and balance between the various members. I mean, I’ve seen various supergroups in rock bands and while they can be fun to watch live, very little of it stays with me. I am keeping this in mind when choosing the members.

I would likely stay in the ‘symphonic metal’ realm but would employ many elements of more extreme music. For lead singer I’d need someone who could do both death and clean vocals convincingly. We played a show with the Israeli band Scardust a few years ago and I was blown away by their singer Noa Gruman – she can literally sing anything. From death to classic rock to opera style, sometimes in the space of one phrase. Her voice is incredibly versatile and she has great charisma, so I’d want her to be up front and centre.

Drums – so many amazing drummers out there but I was blessed enough to record an album with Mark Zonder a couple of years ago – he took the songs I wrote and he didn’t just add the drums I wanted to the song, he added things I would never have thought of and brought a whole new dimension to the music. I would definitely want him on board.

For guitars – I’d choose someone with a really unique, singular and immediately recognizable style who is also very tasteful, an all-round player who is a huge rhythm player but can also give us amazing leads and solos. I am a very big fan of the work of Kosta Vreto of Wardrum – he has a really unique fingerpicking technique which you almost never see in metal music, and is a very well-rounded and respected musician and composer.

Keyboards, there are so many I admire I wouldn’t know where to start! I would be in the tough situation of having to choose between Bob Katsionis, formerly of Firewind, whose style is truly incredible (and we’d get an extra guitar in there too!) or go with my local Cypriot colleague Husein Kyrmizi a.k.a. Japon – of all the keyboardists I’ve worked with, he on a different level of ability and taste, and we are both fans of the same bands.

I think with that lineup we could do something interesting! 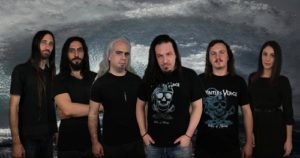 Stratovarius – ‘Eternal’. Their latest effort includes so many new exciting angles with enough of the classic Stratovarius elements and some truly powerful songs.

Symphony X – ‘Iconoclast’. Their longest album with so much to unpack and absorb, so many details to figure out and learn.

Behemoth – ‘The Satanist’. Nergal wrote that album as he recovered from cancer treatment, and it shows, there is a lot of raw emotion in that album. It is at times primal and raw, and others very sophisticated. It is uncompromising and bold.

Rotting Christ – ‘Kata Ton Daimona Eautou’. So much variety in the types of atmospheres, techniques, and even languages in one album, from ferocious blasting to slow, heavy riffs. A masterpiece.

This album is a different approach from our previous ones – less in the way of virtuosic guitar work, more progressive, with bigger sounding-songs and more symphonic tracks, and a strong storyline going through it. It is a more immersive album than some of our previous ones. It was written with the story in mind first and it shows. My favourite songs are ‘Dead Reckoning’, some really big, huge orchestrations with cool changes and a really dark vibe, and ‘I Accept’, which has some really powerful sounding parts and a very catchy chorus; George really outdoes himself on the vocals on that one! It sounds raw, honest, and unpretentious, and really grabs you. This is a special album, no doubt about it, I’m not sure if we’ll make another one quite like it, although it was very fun! 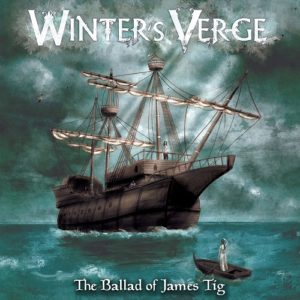 *I suppose you will promote this album through live concerts (when of course everything is getting back to “normal” after the COVID-19 disaster). If so, would you prefer small clubs or big festivals? And is there a chance we can see Winter’s Verge in Belgium?

Big festivals are great because it’s a whole event and you’re attending the festival just as much as playing at it. You finish playing and then go and check out all the other bands you want to see, hang out, socialize, drink, get drunk, fall over, it’s awesome! And it’s very cool to look out over the huge crowd and hear them! Playing at a small club is awesome in a different way – you have more control over your surroundings, tend to play longer sets, and especially if it’s packed and heaving, and every person is caught up by your music and you can reach out and high-5 them, that’s a thrill.

We would love to play in Belgium, there are so many metalheads out there! We hope we can once the world starts going back to normal