I came across rock and hard rock music very early due to my father. My father was a musician and guitarist himself and so it was in a way clear that I’d follow him. I think I was 10 or 11 when I was into Hardrock , short after that into extreme metal. I learned to play guitar at the year of 11.

I think I can’t answer that in details. I think that a lot of artists are responsible more or less of that I’m doing today. Looking back, already some decades assed since I first came in touch with that kind of music. But by thinking tight about it…. I would agree if anyone says that Mayhem had maybe the biggest impact on me. Yes…but not only. Really hard to say

I learned to play guitar at the age of 11. And YES, I got a classical education. I first learned to play acoustic guitar. My father was very insisting on that matter. He said that I should learn to play classical first before I go down to the metal material. Today I’m grateful to him. It helped me a lot on my path as a musician and artist. Today I don’t go to any lessons. You know, you get older and duties overwhelm you. Less time. But I play very often and educate myself. But I see it as „fitness“

I am interested in all kinds of music as long as it is self made. I am a lot into movie soundtracks for I consider myself a „cinephile“ besides being a „music enthusiast“. So besides metal and rock I’m a lot into classical music, into ambient music as well as ritualistic music. I am not into Techno or something like that but as a child of the 80s I still love 80s synthwave. Metal is my fave!

I follow a job besides the music. I work in steel industry without wanting to get too specific here. It’s a job which allows me to follow my way, finance what I love and I think what is my destiny to follow. It serves the cause. It’s not a bad job at all but it’s for sure anything which serves my deepest desires and my thrive for musical and artistic expression. I think I wouldn’t quit my job. I think the music goes into the wrong direction when you decide to make music for a living. The main thing behind your music could die when you got duties like releasing albums, playing concerts as much as possible and so on. The flame of expression would die and I think this would be wrong for me.

*If you could start a band with other musicians on other instruments, which artist would you pick for wich instrument and why? (Something Like an “All Stars Band”.) Would you still go for a black / death metal band? Or would you do something completely different?

Actually I took a try realising something like this. Two Americans contacted me and wanted to create a project. I agreed and recruited Blastum (Antaeus; Ritualization, Crimson Moon) on drums, Scorpious Androctonus (Crimson Moon, Ex Demoncy, Ex Acherontas, Ex Zemial, Ex Melechesh) on Bass, me doing composing on guitars, no input from the two Americans who contacted me so far but as a surprise Ian Rodriguez from Pecaria and guitar on Thornspawn (Mexico) appeared and already recorded the second guitar. We will see what it will become. Sadly the flow stagnated here before Ian appeared. But we’re a step further. But to answer your question … YES…. it would be extreme metal again!

I would pick Judas Priest – ‘Painkiller’ for its one of my very first metal albums I’ve ever listened to. The guitar work also inspired me a lot.

Then I would pick Darkthrone’s ‘Soulside Journey’ because I imagine that island to be pretty hot. So I’d need some northern darkness to cool me off.

Next would be Kreator’s ‘Pleasure To Kill’. Would need the killing riffs and aggression.

Next would be the soundtrack of “City Of The Living Dead” by Fabio Frizzi. That movie is part of my very existence. Since early youth!

Last but not least I’d also pic Wolfgang Amadeus Mozart’s ‘Requiem’ in its full length and all chapters. Would need the culture and classical art!

I agree on that! An artist’s skills and evolution are best to find in the latest release. It’s a process of becoming and growing. If you are into the way of the night, the left hand path and if you see your whole existence as a pilgrimage, listen to our latest ep. The lyrics are very personal and I made the song “et diabolus incarnatus est” my personal autobiography. Because I replaced the whole line up, there are no compromises, the music is even better. In combination with the whole concept it’s a special journey into the abyss. Get your ticket! 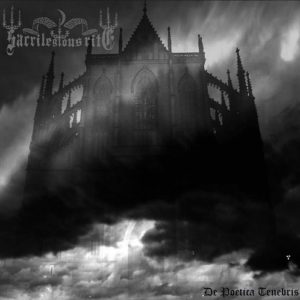 *I suppose you will promote this album through live concerts (when of course everyting is getting back to “normal” after the Covid 19 disaster). If so, would you prefer small clubs or big festivals? And is there a chance we can see Sacrilegious Rite in Belgium?

Hell yes, there is! We are working now with John Berry of Slaughter Messiah and Nocturnal on Drums. He’s a Belgian and he will also record our next releases. He already played a live set with us so the chance to get unleashed over Belgium is pretty high! Look out for it. Covid won’t last forever!