It is not about avoiding fear of the pitch-black darkness, but to go into the darkness itself…

Norway’s premier progressive black metallers Enslaved have released the second single ‘Jettegryta’ from their upcoming studio album »Utgard«. The single is accompanied by a frost-bitten video, in which an Icelandic pristine glacial landscape is darkened by sinister events. Today, the band have also launched pre-orders for »Utgard«, which will be released on October 2nd.

Grutle Kjellson commented on the video: “Iceland was the perfect place to shoot the video for ‘Jettegryta’. Jettegryta translates to Giant´s Cauldron and refers to a phenomenon in nature, where rivers/running water – over a long period – create an often cylindrical hole in solid rock. In ancient Norse folklore, the Jette/Jotun (giants) made these cauldrons to cook in. Although these particular nature phenomena don’t exist on the volcanic island of Iceland, there are plenty of other places on this magical island that could lead to the dwelling of the giants! When Norse settlers came to Iceland in the 8th and 9th century, the fumes and fog from the hot streams and the volcanos clearly told them that this island was inhabited by elves, dwarves and giants! This reminded them of the stories of »Utgard«. To them, Iceland was on the doorsteps of »Utgard«, the outer borders of the world of men; a gateway. The lyrics of the song deal with entering such a mythological and esoteric place; deep within your own mind and imagination, a gateway into the dreams, the unconscious and the realm of chaos. We have tried to transform these words into this clip, and maybe you can feel a glimpse of what those early Icelanders felt when they first entered this realm!” 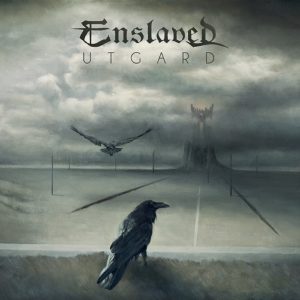 In »Utgard«, Enslaved continue exploring uncharted progressive and psychedelic territories – placing them in a unique position of both bearers of tradition as well as explorers into the unknown – propelling themselves into the future, yet honouring their roots.

The band previously explained: “»Utgard« bears countless meanings to us; an image, metaphor, an esoteric ‘location’, a word on its own etc. – on different levels and layers. From Norse mythology we know it as a landscape where the giants roam; where the gods of Asgard have no control; dangerous, chaotic, uncontrollable and where madness, creativeness, humour and chaos dwell.

The album is a journey into and through Utgard. It is a place of unification of that which is above and that which lies below. It is not about avoiding fear of the pitch-black darkness (it will keep on growing until the next confrontation), but to go into the darkness itself. This is the rebirth of the individual. In a world that has become so obsessed with the false lights of greed, jealousy and egotism this is a necessary journey.

Utgard is not a fairytale, it is a vital part of both your mind and your surroundings, and it has been since the dawn of mankind. Acknowledging that this realm exists and is a vital part of the self, has inspired us deeply since the early days of our lives. Enjoy our journey to the outer limits.”

All shows will be streamed here: http://nblast.de/EnslavedYouTube For more information head here: http://enslaved.no/cinematic-summer-tour-2020/