I have been into heavy music since I was a toddler. My father used to rock some Judas Priest and Nazareth on our audio system and I would dance along the rhythms, enjoying the music. In teenage years I got into grunge and alternative rock; as I was tolerating harsh vocals more and more, my interest in heavier and darker music grew accordingly.

Woods Of Desolation and Austere were the first black Metal bands that I enjoyed so much I started digging for more. Honestly, I’ve listened to so many that it is hard to say which band contributed the most; I liked BM classics like Immortal, Darkthrone, Marduk, Gorgoroth; and also more recent BM acts like Horna, Sargeist, Dark Funeral, Mgła. Also I should say that I never stopped listening to Alternative, Post-Metal or Melodic Death Metal bands, which also might’ve had their influence: Antimatter, System of a Down, Amenra, Toundra, Dark Tranquillity, early In Flames, etc. Nothing too kvlt or underground here. 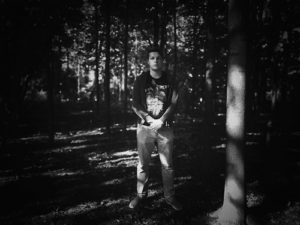 The decision to pick up the electric guitar was mine alone. Back in high school I thought it would be very cool to try and play some of my favorite solos or riffs, trying to re-create the atmosphere of the original song. So I started learning via basic internet tutorials and mostly tabs. As soon as I realised how simple the tabs were, I immediately tried to learn some of my favourite songs using them. And that was it most of the time – tabs, internet tips, trial & error. After years of blind practice I finally decided to get some metal guitar lessions, and these really helped to understand my instrument. Fun fact – the guitar teacher was the guy who is now responsible for mixing my music. Later, when I got into composing songs, I also picked up the bass, but have always played it like a guitar player, not really learning to be a proper bass player. I learned to map out drum tracks by analyzing drums in songs and watching some drum lessions, so I really don’t consider myself a drummer, I just kinda know how this instrument works in songs – and use this knowledge in composing music.

As I have mentioned, I never stopped listening to alternative rock, so there is that. Lately I really got into synth-pop, new-wave, that kind of electronic music. I can also get into some neoclassical and ambient stuff. One thing about music that I learned after listening to countless bands – the genres often don’t matter as much as the mood of the music; the mood is what often captivates you, not the fact that it’s played on certain instruments or fully programmed. If there is sad or dark atmosphere, tragedy and sincerity involved, and it is done tastefully, I almost certainly would dig it, no matter the genre.

I have a degree in English translation, so my primary job has to do with that. Income from music is more of a bonus (which I am still infinitely grateful to receive), and mostly goes back to covering music-making expenses. If I had a stable income from music that could compare to how much I can make as an interpreter, of course I would’ve quit the primary job, but realistically speaking, it’s not happening any time soon.

It would most likely be a cover band to jam and hang out with. The genre could be anything rock and metal-related. I would go with Jesper Strömblad for lead guitar, Steve Di Giorgio on bass, Maciej Kowalski on drums, yours truly on rhythm guitar. Although my playing would suck terribly in comparison, so I would be kicked out and start a band with a more humble line-up.

‘Torn Beyond Reason’ by Woods Of Desolation, ‘Isolation Songs’ by Ghost Brigade, ‘Hour Of The Nightingale’ by Trees Of Eternity, ‘Ephemeral’ by The Anix and ‘Leaving Eden’ by Antimatter. These are some extremely personal albums that not only lack imperfect songs, but also have made an impact on me somehow, and I will never get tired of listening to them. There are more, but these are the first five I came up with.

I’m not going to say that my new album ‘To Mantle The Rising Sun’ is the best one, it’s just different than the first. There is more lead guitar, more genre experiments, and it generally took more ambition to create from a composer’s standpoint. I do hope that the listeners can hear that in the music. Sometimes people want more of the same, but I always try to go beyond a single composition formula. 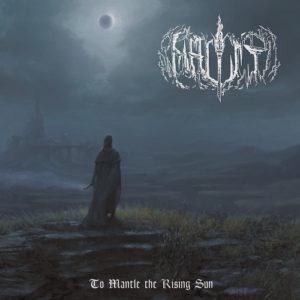 *Is there a chance that you will promote these songs through live concerts? Are there contacts with other musicians to promote the album live yet? And if so, would you prefer small clubs or big festivals?

Malist will most likely remain a studio project. It is too costly and time-consuming for me to play live. Maybe in the future I will consider my options.

P.S.: This interview was conducted before the restrictions due to the Covid-19 Virus.