Well, for most people it starts with a older kid in the neigbourhood. In this case it was my older sisters boy friend. He brought me mixed tapes of Napalm Death, Sinister, Dismember in early 90’s. He played in a band in their garage, so I started to dream of that as well. Then as you go along, the dreams grew bigger and bigger and ended up with world tours and such. So I have to say thank you to him for giving me such a fun life!

Music wise, I have to say that whole era of black / death metal in the 90’s. Growing up in your teens really sets a foundation of how you will become as an adult, so I still love those albums around 92-97. Off course I like new albums as well, but the releases around this time still influence me and is the sound I want to play. Band as Edge Of Sanity, Dissection, Sacramentum, Satyricon, Immortal, Dimmu Borgir, Cradle Of Filth and such.

I started playing guitar around the time I found metal, around 11 years of age, but without guidance. So it took forever to become better. It was not until I was 15 I started to play with other people. And after that I started pracitcing more. But still, no guidance. I tried a guitar class once and didn’t like it. So I have never learnt scales or chords or anything like that. I have just played a lot with other people and got better from that. Since recording at home got a lot easier, I have recorded my self a lot and that has made my progress a lot more as well.

I listen to a lot of different music, but what all music I enjoy have in common is that they have a lot of melody. But I hardly ever put on an album that isn’t a metal album, it’s more a song here and there.

I took the choice of not doing music full time when we got our first kid. I have been working in marketing since 2004, so that is what I still do every day. But as the kids grow older, they don’t need me home as much as when they where young. So it might be an option now in the future to focus on it full time. 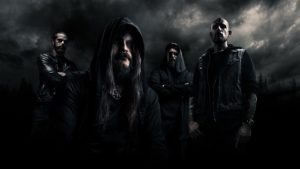 *If you could start a band with other musicians on other instruments, which artist would you pick for wich instrument and why? (Something Like an “All Stars Band”.) Would you still go for a melodic black / death metal band? Or would you do something completely different?

I have that all-star band already, Night Crowned! So if I would go and play something different, I would probably make a dark power metal album, with Daniel Heiman and Jorn Lande on vocals, Jonah Weingarten on keys, Gus G and Michael Amott on guitar and Kevin Paradis on drums. I would handle the bass in that band and write songs with the rest of them.

OK, here goes:
Dissection – ‘Storm Of The Light’s Bane’. Every song on this album has a purpose, it takes you on a journey and I can never get enough of the dark and bleak landscapes it paints in my head.

Edge of Sanity – ‘Crimson’. This album goes from fast, to heavy, to melodic, to calm. This album has all the elements of metal that I like and more.
Insomnium – ‘Winter’s Gate’. Insomnium really brings the 90’s Edge Of Sanity sound to life but with a Finnish touch. Great players and songwriters.

Dimmu Borgir – ‘Puritanical Euphoric Misanthropia’. The album that for me really brought an epic and grand sound into metal. Really cool songs with twist and turns that you didn’t expect.

Death – ‘Symbolic’. It is really hard to choose just one album by Death, but this album has it all. The songs, the production, the players. It really is a master piece from first to last note.

And as you can see, very melodic albums all of them =)

We have made an album, filled with songs that brings the glory of the 90’s black / death metal scene to life again. We gave it new clothes and gave it a modern production. But it all comes down to songs, and we have 11 of them on this album, and all are great!

If I should choose 3 songs that stand out, I would say:

‘Sacriligious Flesh’ – An epic and big song, with a different feel to it than the rest of the songs. This song also speaks the same language as the new album will speak. I still have things I would like to change in it, but it turned out great on the album.

‘Your Ending, Your Demise’ – A hard hitting song with a strong opening. You know exactly what to expect when the drums kick in and it grips you until the last note rings out.

‘Ira’ – I really wanted to create a song with both heavy and fast elements that gave us a Scandinavian feel to the song. We added acoustic guitars as an over dub on the electric guitars, clean vocals by Johan on the pre-chorus that makes you think of monks singing almost. This turned out to be the fastes song on the album, but you still get time for breathing bethween the blast beats. 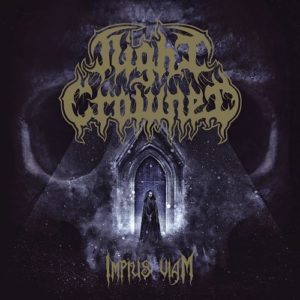 *Is there a chance that you will promote these songs through live concerts? If so, would you prefer small clubs or big festivals? And is there a chance we can see NIGHT CROWNED in Belgium?

We are looking for a booker that could help us with just this, and we are right now negotiating with some bookers for tours in other parts of the world. But to be honest, big inside arenas or big tents at festivals are my favourite gigs. Small shows offer a different and great vibe, you get so close to the audience, so it is hard to choose.