Cathubodua was formed back in 2013 in hopes to bring epic stories and bombastic symphonies to the world.

The band’s sound can best be described as a perfect blend of metal with a folky touch and a wide range of vocals, while symphonic elements will make sure that you’ll immerse yourself into Cathubodua‘s musical vision.

Their debut album “Continuum” is expected to be released later this year.

The band comments: “We are very proud to work together with Massacre Records for the upcoming release of our album ‘Continuum’. We poured our hearts and souls into this, and can’t wait for you to hear it!”

They recently placed second at the Belgium finals of the W:O:A Metal Battle. 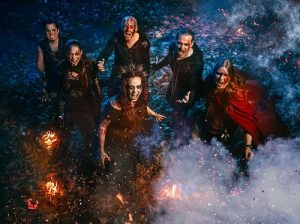