Time To Kill Records is proud to announce a worldwide deal with the industrial-influenced melodic metal band 5RAND.

5RAND is a metal band from Italy: their sound combines Julia Elenoir’s clean and growling vocals, melodic, ethereal elements and the aggressive riffing of extreme metal, evoking a dark, disturbing violent, and yet captivating, atmosphere, often conjuring comparisons to acts such as Slipknot, Fear Factory and Dark Tranquillity.

Following on the heels of the widely hailed debut album “Sacred/Scared” (2017), 5RAND toured Italy and Europe supporting Vader and Immolation and openened for bands such as Behemoth and Sepultura in several occasions. In 2018 the band toured Europe supporting Dark Tranquillity and Equilibrium and played many more headlining shows all over Italy.

Their upcoming second album will be released worldwide on Time To Kill Records. The release will be once again followed by an intense live activity. 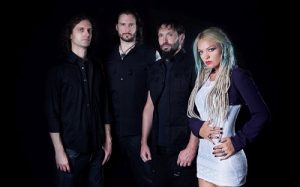