Næstved Metalfest announces festival headliner and another two acts for the, now, enlarged version of the festival in 2023.

Næstved Metalfest hereby reveals the headliner for the 2023 version of the festival and spices things up, by adding another couple of very interesting names to the line-up. On top of that, the festival announces that an extra day is added to the schedule so that the party starts already on Thursday, August 24th and will continue till late, Saturday night, where this year’s headliner will enter the stage as the last of 24 great acts:

We’re welcoming the absolute undisputed kings of British death/doom-metal, Paradise Lost. Further introduction ought not to be necessary but if you mention albums like ”Gothic”, ”Icon”, ”Draconian Times” and ”One Second”, not to forget their latest, amazingly great album, “Obsidian”, there should be no doubt within any metal-lover as to what awaits on Main Stage in Næstved on a late evening in August. Paradise Lost has defined an entire metal-genre with their wicked and beautifully melancholic death/doom metal and we’re absolutely stoked to be able to present an amazing band, such as these British super Icons on Sealand’s largest Open Air Metal festival, with a capacity of 3.000 people. 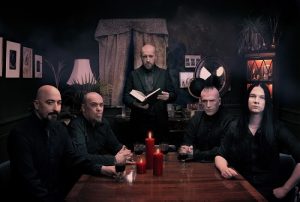 The Danish thrash-kings in Artillery celebrated their 40 years anniversary in 2022 – an impressive achievement in itself – and ended the year with a completely sold-out anniversary concert, with special guests, amongst others Michael Denner (Mercyful Fate, King Diamond), who any metalhead should know well. Næstved metalfest decided to pay tribute and let everyone who didn’t get the chance to witness this special show have the chance to do so anyway. Thus, we have booked Artillery, feat. Michael Denner as an extra celebration of the band’s long and extended career.

Strigoi is a relatively new name to the scene, consisting of people with huge experience within the world of metal. The Season Of Mist act, which holds members from, amongst others, Paradise Lost, Carcass and Extreme Noise Terror, are pounding forward with an exquisite blend of old school death metal, grind core and punk, with Greg Macintosh’s trademark lead guitar as the icing on the cake. We promise evil, darkness and dirt when Strigoi enter the stage in postal code 4700.

Næstved Metalfest is, as previously mentioned, extended from two to three days and it means that the festival will feature a total of 24 bands. We still need to announce nine further acts, who’ll be announced in bundles of three in February, March and April, so there are still lots of acts to look forward to.

Early-bird tickets, version 2, will be available up and until February 1st for the lovely price of 666 Danish Kroner, so you better act fast and save some money on the ticket, already now on this link https://billetto.dk/e/naestved-metalfest-2023-billetter-684259

After February 1st the ticket price will increase to 799 Kroner so it’s quite a significant discount if you make sure to purchase your ticket before February! 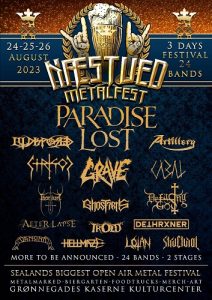