There has always been a lot of music in my time growing up. My parents has always been enjoying music, and my father played the drums. We actually had a rehearsal room in our basement with a drum set, guitars, amps and all the needed equipment for starting a band, so I had the chance to explore a lot of different instruments from a young age. The metal / rock-genre definitely came when my guitar teacher introduced me to bands such as Metallica, AC/DC and so on. And then I grew up a few kilometers from Roskilde Festival, so I’ve seen a lot of rock concerts there as well in my teenage years, where the heavy music definitely dragged my attention.

When we started Junkyard Drive, it was all about the old school hard rock (It still is) like: AC/DC, Guns N’ Roses and Airbourne. As the years went by, we have searched back in time, and now we also get inspired from the 70’s rock scene such as: Led Zeppelin, Deep Purple and Aerosmith.

I started out drumming. Then my parents got me into a music school and I took a lot of guitar lessons. And then I spend many hours online learning stuff from videos on youtube/Ultimate Guitar. I could sit there all night, just practicing and practicing. Now I’m singing, and I don’t spend so many hours with the guitar. I do have a vocal coach, who I take some lessons from before we have something big, like a festival or a longer tour. Just to keep up my vocal-shape.

Actually I love almost all kinds of music, and I can be inspired by many different genres. Besides rock, I especially enjoy jazz, blues and also a bit of rap / hip hop because I find the lyrical skills from a rapper very interesting.

We all have regular dayjobs besides JUNKYARD DRIVE. Claus work as a carpenter, Sjus is a woodworker, Olli is a sub teacher and Kris is working with customer service. There’s no doubt that we’ll quit our jobs as soon as we can when the time / succes is there. 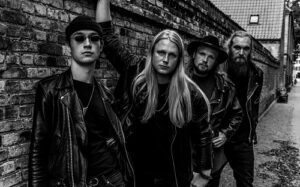 *If you could start a complete new band (something like an all star band) with other musicians on other instruments, which artists would you pick for wich instrument and why? Would you still go for a hard rock / melodic metal band?

I think we would restart JUNKYARD DRIVE, with Claus on drums, Sjus on Bass, Olli on Guitar and Kris on vocals. There’s no need to form a new band when you’re playing in the one you love 😉

It would be some of the legendary records from the 70’s & 80’s. Everytime you dig into it, there’s something to find. It would probably be: AC/DC – ‘Highway To Hell’, Guns N’ Roses – ‘Appetite For Destruction’, Led Zeppelin – ‘Led Zeppelin I’, Black Sabbath – ‘Paranoid’ and Deep Purple – ‘Machine Head’.

Our new album “Electric Love” is a new side of JUNKYARD DRIVE that hasn’t been seen before. The songwriting is much stronger, and what you hear is a much more mature band. It’s still smashing hard rock, but the teenage vibes are gone. One of the songs that really stand out must be “The Wonderland Of Temptations”, which is our version of a classic rock ballad, with piano, strings and A LOT of emotions going on. People can expect well written hard rock songs and lyrics that are much deeper than we did before. 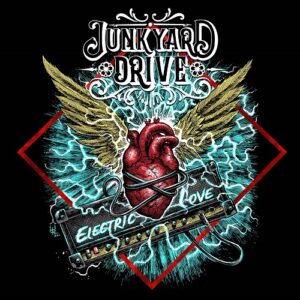 *Is there a chance that you will promote these songs through live concerts? If so, would you prefer small clubs or big festivals? And is there a chance we can see JUNKYARD DRIVE in Belgium?

Yes many of the songs have actually been performed live. We love to play new songs live to keep the show fresh and interesting. We would love to play at more festivals, because this is where we have the chance to spread the words of JUNKYARD DRIVE. We actually played in Belgium in 2019 when we toured the EU with Eclipse. We had a great show at Biebob in Vosselaar, and we would absolutely love to go back.