I’ve been introduced to Metal when I was around 10-11 years old. I think it was first introduced by some Metal shows at MTV I was listening at the time. I recall asking the bus driver when I was still in elementary school, to put “Lights, Camera, Revolution” by Suicidal Tendencies! It was quite heavy for such young kids in the bus!. I soon discovered more “violent” sounding bands like Sepultura, Slayer, Kreator, Death, Morbid Angel and… Entombed that litteraly changed my whole life in 1992. That guitar sound was haunting me! Some times later I was also attracted by the mysterious and satanic imagery of black metal. I don’t remember which album I discovered first, but I already knew Darkthrone because I liked very much their debut album. When I went to a local metal shop in Quebec, I saw “A Blaze In the Northern Sky” on cassette! As I already knew “Soulside Journey”, I thought it was going to be in the same vein, hahaha. It was a big surprise when I listened to it the first time, I didn’t like it at first because my ear wasn’t used to a raw and reverb-drenched production like this. But you know… after this I discovered many more albums from Norway of course, but also Samael, Rotting Christ, Necromantia…

It depends because I am very open-minded to all music styles. For Sorcier Des Glaces especially, I am very conservative and I want a specific sound, vibe… so it is mainly 90’s and some ‘80’s black and thrash metal bands. It is no surprise that an album like “De Mysteriis Dom Sathanas” has a huge influence, even today, on me. I could name some “classic” albums like “A Blaze in the Northern Sky”, “The Somberlain”, “Witchcraft” by Obtained Enslavement, early Samael, Ulver. I am also very influenced by classical music and movies soundtracks. 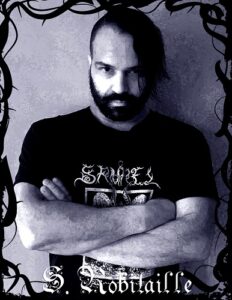 I learned guitar in high school. One of my best friend – Eric St-Laurent – who also is the one who helped me record our debut album “Snowland” in 1997, we were playing classical guitars and we didn’t really do what the teacher wanted us to do in the classroom! We’d rather compose some classical harmonies and songs together, instead of learning to play some pop songs on guitar with musical sheets we were asked to do! I think this is where I learned to compose song structures, harmonies, etc. I started by band Moonlyght around that time, we were playing more of a death/doom metal and heavy metal mixture in 1995/1996.

Absolutely! I am very open-minded to music. I was working in a record store in the eartly 2000’s so it helped me to discover many different styles that I wasn’t used to. My son is often asking me to put hip-hop in the car, so I have to be VERY open-minded, hahaha! But you know, there is so much to learn, to hear in other musical expressions, cultures. I don’t want to bring those outside elements in SDG’s music though, but to hear different melodies, song structures help me a lot to evolve as a songwriter, musician. I like old progressive rock from the 70’s like the first Genesis albums, early Pink Floyd, King Crimson. I’m also listening to some shoegaze bands from the 90’s like My Bloody Valentine or Slowdive, some post-punk, some indie rock…

Not at all and it’s ok to remain like that. Me and Luc have full time jobs beside music. I am working at business developpement for an Insurance Company, and Luc is a truck driver for a postal service. We also have kids, families to care. I want Sorcier Des Glaces to remain authentic and more of a hobby – a huge one of course – but who allows us to express our artistic creation, not trying to make a living out of this. No pressure in doing festivals, gigs, rushing albums out, etc. For me, it is very important to remain like that. Luc also plays drums in some other bands like Headstud (rock/stoner), Ocarina (rock) and we also have Moonlyght together with other musicians. I also work in my home studio doing mixing and mastering, producing albums for some bands. 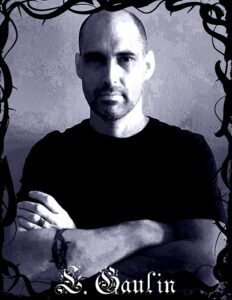 *If you could start a band with other musicians on other instruments, which artist would you pick for wich instrument and why? (Something Like an “All Stars Band”.) Would you still go for a black metal band? Or would you do something completely different? – We do know you play both in Passage (melodic doom metal) and in Moonlyght (progressive metal with folk influences).

Well, that’s a good question! I don’t know because I played in many bands already since more than 25years now, and I used to know a lot of talented musicians – some of them are now music teachers. I feel nostalgic sometimes when I think about the first band I was introduced to as a singer, it gaves me a lot of confidence and bases. It was called Chaos Foresight and we were mainly playing metal cover songs. Anyways, I don’t think I would do a black metal band at all. It shaped my life and my appetite for Sorcier Des Glaces, but I am not listening much to this music genre now, strangely.

-Pink Floyd ‘Dark Side Of The Moon’ – One of the best albums ever released/composed, all music combined.

-‘Conan The Barbarian’ soundtrack, by Basil Poledouris. Simply the best orchestral medieval music, a travel to the ancient, forgotten times.

-Mayhem ‘De Mysteriis Dom Sathanas’ – A real classic, if the not THE best black metal album ever made. The morbid, dark, obscure satanic atmosphere remains unequaled for me. This is what black metal is, for me.

-Slowdive ‘Just For A Day’ – I really don’t know why I always come back to this album so many years after I discovered it, but I guess the dreamy feel, the sad and quite relaxing atmosphere, soft angelic vocals but some kind of warmth in the sound I cannot describe.

-Angelcorpse ‘The Inexorable’ – I can’t think of any other death metal album that has this rage, this raw, this enery and speed found on that particular record. It’s absolutely relentless, it never stops!

You got it right, haha! We evolve as every other band and of course I feel that our new album “Un Monde de Glace et de Sang” is probably our best work to date not only because it brings elements of all our past albums, but because we kind of elevated SDG to another step in our minds. Of course I’m very proud of every album we have done, but overall the feeling found in the songs throughout this quite long album, the melodies created, are probably the best I have ever wrote. Time will tell, of course! I am also very happy with the result of the part two we did for the old song “L’Éternelle Majesté des Montagnes” found on our debut album. I wanted a REAL continuation, not only naming a song that would be completely different. That was kind of uplanned at first, and I did compose that song a bit late in the recording process. 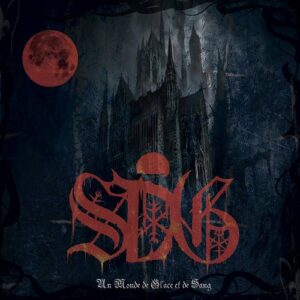 *Is there a chance that you will promote these songs through live concerts? If so, would you prefer small clubs or big festivals? And is there a chance we can see Sorcier Des Glaces in Belgium?

I don’t think we will ever play live, unfortunately. We’ve been offered many times, but we want to remain a duo. Of course we could hire session musicians and do some shows/festivals, but I don’t know… I could not imagine a Sorcier Des Glaces concert like playing songs and tell people “C’mon bang your head!”, it would have to be more like a theatrical and atmospheric thing, and that would be hard to create live the way I would see it. Well, never say never as they say, but we are not interested at all in doing this for the moment. Thanks for the interview!