Season of Mist are proud to announce the re-signing of German extreme metal band Der Weg Einer Freiheit. After the successful releases of ‘Stellar’ (2015) and ‘Finisterre’ (2017), the label is happy to continue the cooperation with one of the most interesting and hardworking bands in the extreme / black metal scene. Der Weg Einer Freiheit will release a brand new album in 2021. Der Weg Einer Freiheit vocalist Nikita Kamprad comments: “It’s been a little quiet around us lately but rest assured we have worked our asses off this year to finally present you a new album in 2021! For this we are more than happy and honoured to have teamed up with Season of Mist yet again that we feel is the perfect home for us and our music. We’d like to thank them and all our fans out there for their tremendous support throughout the years! The final recording sessions for the new album will take place in March next year at Ghost City Recordings, the studio where we have also recorded the predecessor albums ‘Finisterre’ and ‘Stellar’. If you want to learn more about the progress and works on the new album, be sure to subscribe to our newsletter on www.derwegeinerfreiheit.de that we will use regularly from now on to broadcast more in-depth information about what’s going on you might not find anywhere else.”

Der Weg Einer Freiheit have previously released a live EP of their performance at Metal Injection’s ‘Slay at Home’ Festival. The tracklist and artwork of the EP can be found here. 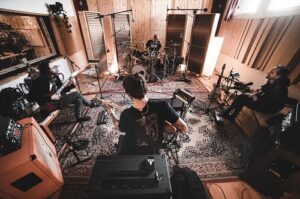