*When did you really get involved in music in general and into metal specifically? Who was responsible for your interest in (metal) music?

I got into metal at the age of 12. I stumbled upon Ozzy Osbourne and Randy Rhoads online (Ozzy when I was watching a TV commercial about World of Warcraft), and I found the guitar sound amazing. I had never heard anything like that before.

Obviously the Big Four and also Havoc, Warbringer, Testament, Pantera and so on.. But I personally also listen to other genres like punk, ska, hip hop and jazz. If it’s interesting, I’ll never not give it a chance just because it isn’t metal.

I play the guitar. I went to boarding school with Max, and we both had private lessons with a teacher, but this was probably 6 or 7 years after I initially started playing the guitar. Besides this, I just taught myself via YouTube and other online stuff. I don’t really follow any lessons or tutors anymore though, as I can pretty much just learn things by ear now.

I like hip hop, e.g. Eminem and Wu-Tang Clan. Anything with a message that is worth listening to. We have two Danish artists, Klumben and Raske Penge, whom I really like because they talk about important stuff, not just sex and money.

The rest of the guys have jobs – Bjørn is a carpenter, Max is an electrician and Aria is a bartender. I have an education as a sign technician, but I’m currently unemployed. There are unfortunately very few sign technician gigs around, so it makes it quite difficult landing a job. So yes, I would definitely go full time with music if it ever presents itself as a possibility. 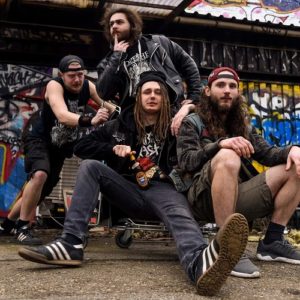 *If you could start a band with other musicians on other instruments, which artist would you pick for which instrument and why? (Something Like an “All Stars Band”.) Would you still go for a thrash metal band? Or would you do something completely different?

I don’t know, I think my All Stars Band would incorporate guys from Pantera or Slayer. If I could take Kerry or Jeff’s spot, that would be awesome. But truth be told, I’m quite happy with our band as it is – so same band, same genre, same guys!

*Every new album (or ep) of a band or an artist is the best one (we don’t know if it’s the first full-album), that’s what they always say. So here is a chance to promote the album. Why should a music lover buy your album? What are the standout tracks for you on this new album and why?

It’s an old school thrash metal album. I would always buy another thrash album, especially if it’s old school. I think the song ‘Until The Day I Die’ will probably raise some eyebrows. We’ve never done anything like that before, and the song means a lot to me personally, too. 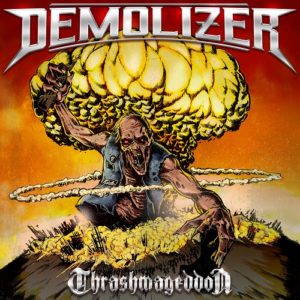 *I suppose you will promote this album through live concerts (when of course everything is getting back to “normal” after the Covid 19 disaster). If so, would you prefer small clubs or big festivals? And is there a chance we can see Demolizer in Belgium?

Anything really. These days we play house parties. So we do anything from your living room to Wacken if that opportunity would ever present itself.