*When did you really get involved in music in general and into rock-specific? Who was responsible for your interest in (rock) music?

-Drummer Keaton: Individually we all have our own personal stories of how we each fell in love with music, but I believe for all of us rock music has had a special place in our hearts from a very young age. For me personally, my love for rock music is all thanks to my dad and the great rock records he spun when I was growing up. In fact, my earliest memory was listening to Boston’s debut self-titled album back when I was who knows how old. 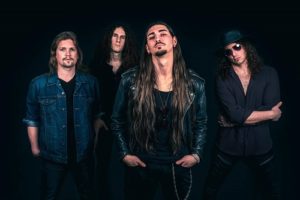 -Singer Reed: We all have such a wide range of influences, but we mostly meet in the middle on such bands like Guns N Rose’s, Aerosmith, Led Zeppelin, Audioslave, Velvet Revolver and various artists / bands from the mid 60’s through the mid 90’s.

*Is music a full-time job for you now or do you have a job besides music? If so, what kind of job are you doing? If you would be really successful with music, would you quit your other job?

-Drummer Keaton: The dream for all of us would be having music as our full-time career, and with half of the band currently teaching music as their side-gig, we have gotten even closer to that point. If the opportunity came where we could all drop everything and do nothing but In/Vertigo and be successful doing it, then that would be an opportunity we would not relinquish.

-Guitaist Shaddy: I started guitar the summer of grade 9, and am predominately self taught. A few months into it a teacher at school taught friends and I open chords. I loved how different acoustic and electric guitars would sound dependant on how you played them, I was hooked. I’m mostly self taught but Im always learning things from other musicians, I just have to learn my own way. And I thank my parents for grounding me so much during High School, thats where I put in most my hours.

1 ‘Appetite For Destruction’ – Just a nonstop, no bull shit Rock n’ Roll record. I can’t really love an album unless every song on it is a monster, and this is one of those staples.

2 ‘Randy Rhoads Tribute’ – A live Ozzy record featuring the late Randy Rhoads showcasing my favorite songs off both of his iconic records, as well as some classic Sabbath, it is undeniable and the energy is bombastic throughout the whole thing. The whole band is on fire.

3 ‘Nevermind’ – Nirvana – I remember in ’94 how much airplay Nirvana was getting and everything about the band epitomized rock ‘n’ roll and the grunge takeover. This was the first record I really loved.

4 ‘Beatles no 1s’ – If you’re on an island you’re gonna need some happy music, and this record has a lengthy 27 songs on it. I think they’ll go down as the greatest songwriters of the 20th century.

5 ‘Zeppelin 4’ – I think this is an important one for all 4 of us, it showcases a band that wasn’t bound by any limitations, and every song has its own glow. A cohesive, iconic, and wholly unique piece of art, plus if you couldn’t show the island natives Led Zeppelin, they’d probably eat you.

*Do you follow others or are you interested in other styles of music besides rock? If so, what is the music you prefer to listen to?

-bassist Duncan: Rock ‘n roll is, of course, near and dear to our hearts but we all love a wide range of music. We all have wildly different tastes and we’re always discovering and showing each other something new. You’ll hear us putting on old blues, heavy metal, Beethoven concertos, avant-garde jazz and everything in between; it’s all good.

-bassist Duncan: That’s the million-dollar question, isn’t it? As music lovers, we look for music that speaks to us, excites us, maybe scares us a bit but leaves us wanting more. And we put everything we have into creating art that does all of those things.

As for whether or not we succeeded and which tracks are standouts, you tell us.

– See “CD-Review” for a review (written in Dutch) for the new In / Vertigo ep ‘Sex, Love And Chaos’ (Rockshots Records) – 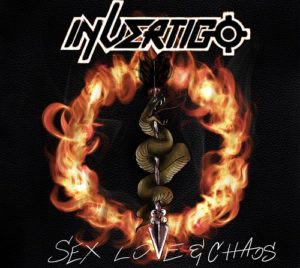 *I suppose you will promote this album through live concerts (when of course everything is getting back to “normal” after the COVID 19 disaster). If so, would you prefer small clubs or big festivals? And is there a chance we can see In/Vertigo in Belgium?

-Singer Reed: We LOVE to perform and tour. We have played both small clubs and big venues in our career. So we don’t mind either. We make the clubs feel like an arena! While we make the big venues intimate as if we were in a club! We want to make it to Europe ASAP. So Belgium is definitely a must and on our radar. The more support and interest we get from over there will force things to happen! So listen closely for when we come plowing through Europe and Belgium! Leaving a wake of destruction and great nights! And incurably disastrous hang-overs…