*When did you really get involved in music in general and into metal specific? Who was responsable for your interest in (metal) music?

-Daniel: It started when I was a boy with my first tape from AC/DC. I was fascinated by the metal bands of the 80s. Bands like Dokken, Twisted Sister, Ratt, Deep Purple, Whitesnake, Ozzy Osbourne, Ronnie James Dio, Kiss were my favorites. Others came later: Megadeth, Metallica, Dream Theater.

-Nicole: Like most teenagers, I listened to almost everything around me. Unfortunately I had no friends who were into metal. At that time I started visiting many festivals and shows from Depeche Mode, INXS, Midnight Oil and so on. Always in search of special music, I’m happy about new discoveries. At the moment I like modern and melodic bands like Disturbed, Amorphis, Stone Sour, Dark Tranquillity, Trivium, Alter Bridge, Evergrey, Muse, Moonspell and Dream Theater. It has to be musically interesting and contain cool riffs and lots of melodies (if not in the vocals then in the music itself). I love combinations of power, harshness and beauty, and I really like progressive elements.

*Which artists or bands influenced you the most?

-Daniel: Dream Theater, Fates Warning – That was exactly what I wanted to hear, play, and how I wanted to express myself in my own way. 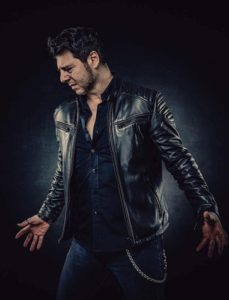 -Nicole: I have great respect for people who have achieved something. It’s hard to name someone specific; some musicians have charisma, a great voice, big talent, are inspired, are able to touch the audience, or show an exciting performance. I like artists who are authentic. I was certainly very impressed with Dave Gahans and Michael Hutchences charisma on stage, and David Draiman has an incredibly agile voice with a wonderful timbre. With lyrics I don’t look too closely because I want to find my own words and thoughts.

-Daniel: The guitar has always been my instrument. My parents told me that when I was three years old I pointed to a guitar in the shop and didn’t want to leave. But I really started as a teenager with classical lessons. Of course, I aimed to play electric guitar in a band, which I soon did. I made my dream come true and studied at a jazz school. Now I’m a full time musician and guitar teacher.

-Nicole: I see myself as a singer but I also play the piano. There were no vocal lessons at the music school where I grew up, but I also absolutely wanted to play the piano. My mother tried – without success – to convince me to play the guitar, because we had one. Later on I had vocal lessons and knew that this was my thing. So I decided to study music and did my artistic educational diploma at a Jazz school.

-Nicole: Music in any style can be great as long as it is full of passion and dedication. Because music is always around me in my everyday life, it’s often more relaxing if I do something else. But when I listen to music, it’s mostly modern metal and that is what motivates me most in sports.

-Daniel: Because of my job as music teacher, I play various styles (pop, jazz, rock, metal and so on). When I listen to music, I don’t really care about the genre, but there must be guitar in it. Also, I want to listen to music of a high level with inspired musicians.

-Nicole: In addition to Miracle Flair I’m a vocal coach. I like both tasks very much and it is a good combination but often hard to find the right balance.

-Daniel: As I mentioned, I‘m a guitar teacher. I would reduce teaching if there were more going on with the band. It’s always a risk to live on music alone.

*If you could start a band with other musicians on other instruments, which artist would you pick for which instrument and why? (Something Like an “All Stars Band”.) Would you still go for a melodic metal / power metal band? Or would you do something completely different?

-Daniel: I would keep this style. My band: Santeri Kallio (Amorphis), because the keys on the current album ‘Queen Of Time’ are just great. Michael Lang on drums for a solid and precise foundation. On bass Billiy Sheehan because he’s an incredible player. On vocals, Samy Hagar, because I assume he’s a really cool guy.

-Nicole: I would stay with melodic metal and ask Mike Portnoy for the drums. He’s an animal, a machine, and a characater type. On keys Martin Gore from Depeche Mode, to find the right floating vibes that underline my voice. He would surely lay great sound carpets and integrate cool modern sounds and effects. Mark Tremonti on guitar would be a great choice! Sting on bass. Well, maybe he’s not so much into metal, but he’s such an inspired musician and grounded person, I assume. I could also sing duets with him, which brings me to other partners for a duet, Dave Gahan and David Draiman that I mentioned earlier. Haha, I guess that would be a fun but possibly dangerous mix. 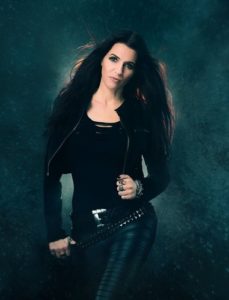 *If you were banned to an uninhabited island and you could pick 5 albums to listen to, which albums would you choose and why?

-Nicole: I would go for Dark Tranquillity (‘Atoma’), because the great tour memories would comfort me in loneliness, and something from Disturbed, Amorphis, Depeche Mode and Evergrey.

-Daniel: AC/DC (‘Back In Black’), I just like this album. Chris Rea (‘On The Beach’), this is a holiday mood album. I would probably listen to that most often. Dire Straits (‘Communiqué’), here I like the dynamics of the whole cd from every song and I love the guitar, it’s a very nice album. Deep Purple (‘Perfect Strangers’), Ritchie Blackmore is a fantastic guitarist and ‘Knocking At Your Back Door’ is a great song. This is one of the best comeback albums ever. Amorphis (‘Queen Of Time’), this is a very modern perfect and great CD.

-Nicole: Each album is influenced by a past chapter of life and shows our personal and musical developments. In general, I prefer to leave it to others to describe or promote our music. I hope people give it a chance and take the time to get to know our world. Our album ‘Synchronsim’ is very personal, there’s a lot of passion and real love for music on it. We created something good and I sincerely hope that the audience will feel it too.

Stand out tracks: ‘What Remains’ and ‘The Untold’ have interesting rhythm changes. ‘Synchronism’ is a very powerful song. I really enjoy singing ‘Lost In The Void’ and ‘Torn Inside’, they show different sides of me. As I want straight power, I would go for ‘Torture Myself’!

-Daniel: We worked very carefully and intensively on ‘Synchronism’. This is a good album, with a lot of passion from beginning to end. It also contains a lot of musicianship and even after several runs you can discover new pearls and details. I personally like ‘The Untold’ and the title song ‘Synchronism’, they are good songs and are the way I wanted them to be. 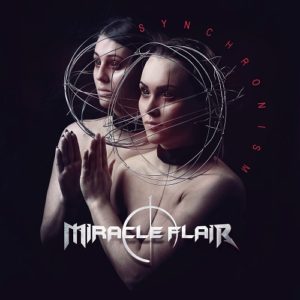 *I suppose you will promote this album through live concerts (when of course everyting is getting back to “normal” after the Covid 19 disaster). If so, would you prefer small clubs or big festivals? And is there a chance we can see MIRACLE FLAIR in Belgium?

-Nicole: I like both. Connecting with the audience in a small club can be a great exchange of energies and vibes. While performing, I like to look people straight in the eye and see their direct reactions. Of course, big festivals are thrilling and a great chance. If we get a cool offer in Belgium, we certainly would be happy to play in your country!

Thanks for your time and interest in Miracle Flair!