Richmond, Indiana’s heavy metal riders Wolftooth have announced the release of their thundering new album ‘Valhalla’ this May 22th on Ripple Music. It’s time to crank the volume up and stream their first single “Firebreather” without further delay!

‘Valhalla’ is a triumphant return for heavy metal unit Wolftooth. One that the band feels exceeds their previous effort. The band explain: “People can expect a more mature Wolftooth. We really feel this is our best effort yet. We also think that the production has taken a step up from our last outing. It’s a pretty diverse record with heavy rockers and straight up heavy metal bangers. We are all very excited about how it turned out and can’t wait for people to hear it!” 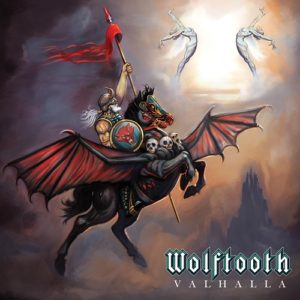 With their sophomore album Valhalla, Wolftooth have truly upped the ante, expanding on their already tried and tested formula, adding more layers and variations in the songwriting and overall musical execution. The production has improved substantially and each track captures the feel and vibe from the recording session.

Hailing from the Midwest via Richmond IN comes the “Stoner Metal Riff Worshipers” Wolftooth consisting of a pack of well seasoned musicians (all 20+ year metal scene veterans) determined to raise the bar of the almighty riff. Wolftooth combines influences from the 70’s and early 80’s NWOBHM with Bay Area Thrash and doom laden riffery. Meanwhile the vocals soar over blues drenched solos that add a stoner sensibility to the Wolftooth sound. Their self titled debut album released by Cursed Tongue Records and Ripple Music in 2018, took the underground scene by storm. The album charted for three consecutive months on the highly respected Doom Charts, ending the year at #7 for best albums of 2018. Metal Hammer magazine heralded the band as “the best pure-blooded heavy metal band in the world right now.” (Rich Hobson- Metal Hammer, August 2018).

Wolftooth are planning on making it’s mark and shaking up the heavy metal underground once again with their upcoming sophomore album ‘Valhalla’ scheduled to be released by Cursed Tongue Records (vinyl), Ripple Music (CD and digital) and from Ice Fall Records (cassette) on May 22nd 2020. 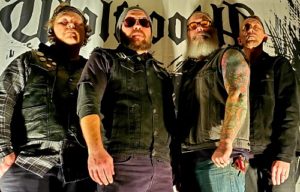