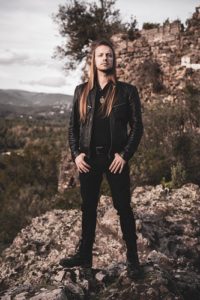 I really developed an interest in music when I was 13 or 14, listening to old rock/heavy things like Dire Strait or Iron Maiden. But I quickly found my way in Black Metal by discovering bands like Emperor, Dissection, Furia (FR), Drudkh … A friend subscribed to a French magazine (Adipocere) and received a lot of new stuff that she shared with me. She is responsible for many of my influences!

It’s not a secret that Summoning and Caladan Brood are my mains influences. But I also draw my inspiration in bands like Moonsorrow, Saor, Arkona, Finntroll … Not always for the music or melodies but more for the way the structures of their songs are made.

I begun to play bass when I was 15 and it still my main instrument I play live (essentialy with Darkenhöld). But I always had an interest in keyboards and guitars. For example, with my first summerjob paid I bought a Korg X5D (the keyboard used by Mustis in Dimmu Borgir’s “Enthrone Darkness Triumphant”) that you can hear sometime in Belore. Recently, I developed a strong interest in folk instruments like tin whitsle, psaltery or vielle. I never took any lesson, private or at school, I self-trained myself with the magic of internet. 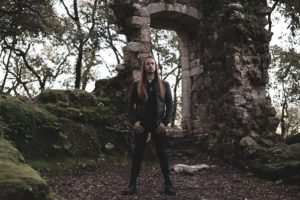 Of course, I love folk and traditionnal music like Отава Ё (Russia), Huun‐Huur‐Tu (Mongolia) or even irish/scotish themes. I also listen some jazz or rock singers (Diana Krall, Alela Diane, Calvin Russell …) or modern electro/pop things (Die Antwoord, Little Big). I’m open to any style of music as long as you feel the artist’s passion or emotion.

It’s a dream for most of the musicians but no, it’s only a hobbie, I work as audiovisual technician and team manager. The conditions to live from your music are so hard to reach that I never considering the question, it’s not my objective.

*If you could start a band with other musicians on other instruments, which artist would you pick for wich instrument and why? Would you still go for a black metal band?

I already have an other band for 10 years as live bassist : Darkenhöld. But if I could choose an inrealistic “all-stars-band” or something like that it will be with Obscura (Asagraum – lead voice) because I really like the atmosphere she gives off in her vocal and her charisma on stage as a front woman ; Ihsahn (Emperor – guitar/vocals) who I don’t need to introduce ; Simon Brette (Aorlach – guitar/backing vocals) it’s a friend and he has an amazing guitar skill in black metal and also folk/classical style with his project “Wÿntër Ärvń” ; Henri Sorvali (Moonsorrow/Fintroll – keyboard) for his amazing talent and kind personality, Lambert Segura (Saor – Violin) another friend I woul’d love to play with, he can bring a very personnal and special touch in extrem music ; Dorian Mansiaux (Sylvaine – drums) the closest friend on the list, his great professionalism and knowledge would be an strong support to the band. As you see, this will stay a black metal band.

– Moonsorrow – Kivenkantaja : I love the entire discography but, for me, it’s the most epic album of this band, especially the song “Jumalten kaupunki (including Tuhatvuotinen perintö)” which is a demonstration of how the epicness music should be.

– Caladan Brood – Echoes of Battle : A masterpiece among atmospheric/epic black metal music and a reference for a lot of bands and people. They brought a new lease of life to the style in the early 2010s. Best song : Book of the Fallen.

– Summoning – Old Mornings Dawn : alsmot impossible to choose one album, I am torn between “Stronghold”, “Let Mortal Heroes Sing Your Fame” and this album. For me, they managed to mix all the ingredients of the previous albums in this one. Best song : Flammifer.

– Finntroll – Nattfödd : the finnish touch in extrem folk music, this album was composed under pressure because they booked the studio before composing only 20% of the material. They tooks risk and it paid, you got an amazing album. Best song : Eliytres.

– I – Between Two Worlds : because I could listen this album until the end of my life, their black’n roll style is perfectly performed. Every song is a hit, but i have my preference with the title “Warriors”.

*Every new album of a band or an artist is the best one (we do know its your first album) So here is a chance to promote you album. Why should a music lover buy your album? What are the standout tracks for you on this first album and why?

My album has lot of influences, every song is different but the ensemble is homogene and harmonious. If you like be transported in a majestic world while you listen music, you’ll find your happiness here. I made sure to mix the album in order to always bring up small melodies and surprise the listener even after the 10th listening. “The Return of the Fallen Heroes” is the best song to discover my universe, but “The Whispering Mountains” shows more varieties that you can find on the rest of the album. I recommend listening to the two titles available on YouTube by reading the lyrics in the comments to better immerse yourself in my world. 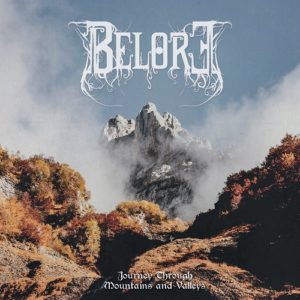 * Is there a chance that you will promote these songs through live concerts? Are there contacts with other musicians to promote the album live yet? And if so, would you prefer small clubs or big festivals?

That’s not my objective. For the moment, I just want to share my music to people, and I’m lucky to have signed with Northern Silence for promoting my project. I play on stage with Darkenhöld and it’s amazing, so I don’t need more. But if in a few years, my ambition change, it will be by building a solid performance where I will be uncompromising. But I’m not thinking about that right now.