It varies for the four members in the band, but for me there were a few specific bands that got me into metal. The first was Nirvana – I remember seeing the music video to ‘Smells Like Teen Spirit’, being totally blown away, and thinking “wow, I need to listen to that kind of music!”. The second band was Alice In Chains – who I really started listening to in high school. They’re a bit heavier and more complex than Nirvana, and I absolutely love their harmonized vocals and melodic sound. The real “gateway” band into metal for me was In Flames, specifically ‘Mirror’s Truth’ off of their ‘Sense of Purpose’ album. That was the first song where I could enjoy the harsh vocals. After that I was all in on the melodic death metal sound! For all the trouble people give In Flames for sounding so different now than their earlier stuff, they really have introduced a lot of people to the metal scene, myself included! I could not have enjoyed Kalmah, Wintersun, or Insomnium if I didn’t get my feet wet with the more approachable In Flames stuff first.

I notice elements of what I’m listening to emerge in my writing, which changes over time, but the most consistent elements are definitely the melodic death metal scene from Scandinavia. Especially the ones that lean more on the “melodic” side of melodic death metal – Kalmah, Children of Bodom, early-era In Flames are the big ones for me.

I play guitar – a Godin Solidac, which isn’t a very common metal guitar. I love the lead pickup, so crisp and crunchy… I got an acoustic guitar when I was 14 (I’m 37 now), but didn’t play it much because the strings were so hard to press, and the music I listened to was rock. I got an electric guitar and a small Crate practice amp when I was 16 and my mind was completely blown. I sat in my room rocking out while playing the basic chords, it was pretty hilarious. I took guitar lessons for a few years to learn the basics (I wanted to take the lessons, mom and dad didn’t make me), but most of my musical training came from learning the piano. I took piano lessons for about 10 years or so (mom and dad made me, but I enjoyed it too). I don’t take lessons now, but have thought about it from time to time. I not the best guitar player – I get by with the music we write, but I can’t shred by any stretch of the imagination.

Good music is good music! Other genres I enjoy include jazz (easy to listen to in the background), classical (similar strong melodies in classical as in melodic death metal), and cheesy techno (Cascada, Ava Max). Some country too.

Music is a passionate hobby for me (and for the other members of the band). We all have “real” jobs. I’m a civil engineering consultant, helping plan stormwater and wastewater systems. To be honest, I’m a better engineer than I am musician – and I really like the work too. Making a living with music is super hard – we just played a show that was a 2 hour drive, and we made $70! But we’re not doing this for the money, it’s because we enjoy it. I don’t think I could handle being on the road all the time anyways – I’ve got young kids, and love spending time with them and my wonderful wife. So in short, no, I don’t think I’d quit my other job if I could just play in a band – that’s not our goal at the moment. 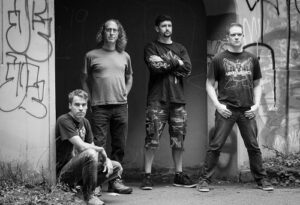 *If you could start a complete new band (something like an all star band) with other musicians on other instruments, which artists would you pick for wich instrument and why? Would you still go for a melodic death metal metal band?

Hard question! I would have to say it’d be amazing to jam with Jesper Stromblad and Timo Rautiainen. Jesper because I love the melodies he’s written for In Flames, and Timo Rautiainen because of the influence he’s had on my song-writing. Timo writes Finnish-language heavy metal – no double bass pedals or cookie monster vocals, but amazing melodies and story-telling through his lyrics. But to be honest – I already play with an all star band, and wouldn’t change a thing about it!

In no particular order: In Flames: ‘The Jesper Race’, because it has Moonshield and Artifacts of the Black Rain / Kalmah: ’12 Gauge’ / Wintersun: ‘Wintersun’ / Sibelius Finlandia Opus 26 (classical music, which contains probably the most famous Finnish song ever) / Timo Rautiainen: ‘Tilinteon Hetki’.

All of these albums have some connection to periods of my life, so not only are they really good music, but there’s definitely some sentimental connection too.

*Every new album – we do know it’s the first full-album – of a band or an artist is the best one, so they say. So here is a chance to promote your album. Why should a music lover buy your album? What are the standout tracks for you on this new album and why?

Haha, well I definitely expect our next album to be even better! But folks should check out ‘Shadow Of Death’ too! Here’s the pitch – we play melodic death metal reminiscent of the glory days of the early 2000s. Highly melodic music with a blackened edge, and not overly technical. Straight up old school Finnish-style melodic death metal. 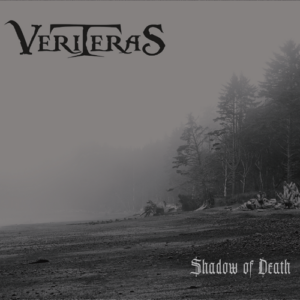 *Is there a chance that you will promote these songs through live concerts? If so, would you prefer small clubs or big festivals? And is there a chance we can see VERITERAS in Belgium?

Yes! We’ve played 6 shows in the Seattle/USA-region, and will be embarking on a brief tour in Finland from 13.5 – 21.5. It’d be awesome to play in Belgium some day, but we don’t have any plans at the moment – so come on up to Finland in May!! We’ve never played anything larger than a medium-sized club (opening for Dark Tranquillity once and Omnium Gatherum another time), so we’ve never tried a big festival. Maybe some day!