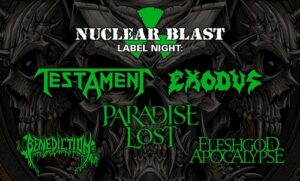 Nucleaar Blast states: “2020 would have been Nuclear Blast Records’ 10th Anniversary of the Summer Breeze label night. Unfortunately, we all know what happened: the darkest year in the history of rock festivals. But we are more than happy that there is finally light at the end of the tunnel and want to thank all fans for staying patient. The rescheduled Anniversary Night will be celebrated with Testament, Paradise Lost and Benediction, who are dying to present to you their latest albums that came out during the ill-fated Corona year, as well as Thrash titans Exodus and the Italian Death Metal innovators Fleshgod Apocalypse, who will both be presenting new songs as well. It’s going to be special! We want to thank the entire Summer Breeze team for their years of friendship and cannot wait to celebrate the return of the festival experience with all of you. And thanks again to all metal fans around the world for supporting the scene! We are bonded by blood!”

Summer Breeze Festival adds: “The Nuclear Blast Label Night at the Summer Breeze is by now well established.The Donzdorf-based label sends a bunch of illustrious names, to spice up the beginning of the festival on the T-Stage. The following Nuclear Blast bangers will hit the stage on festival Wednesday: TESTAMENT, PARADISE LOST, EXODUS, BENEDICTION and FLESHGOD APOCALPYSE.”

Day passes are not sold for the Wednesday’s event, the Nuclear Blast label night can be attended with a regular festival ticket. You can purchase tickets for the Summer Breeze Open Air 2021 here: https://www.sbtix.de/home

About Summer Breeze: Summer Breeze Open Air is a German metal music festival which takes place in Dinkelsbuehl, Bavaria annually. The first edition was in 1997. The festival had been held in Abtsgmuend until 2006 when it was moved to its new location of Dinkelsbuehl. The festival draws around 40,000 attendees annually. In 2017 a new main stage was introduced and the 20th Anniversary was celebrated extensively. Summer Breeze pays special attention to a balanced line up of bands from different Heavy Metal genres. Each year the festival attaches major importance to how the line up is put together. From bands that are deeply rooted in the underground to genre representatives with the highest standing in the worldwide music scene SUMMER BREEZE Open Air is trying to present a diversified billing each year. Being aware of the significance of supporting younger bands the festival has began to lay emphasis on a growing (social) media coverage of the prospective heros of tomorrow. With over 1000 different bands in the last two decades and bands from around 20 different countries each edition there is a lot to experience at Summer Breeze, that´s a recurring promise and an honored pledge.