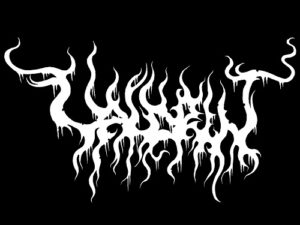 I’ve been fascinated with music my entire life, though originally I wanted to be a filmmaker. My older brothers had a guitar and a drum set, as well as a big music collection. When I discovered how to record music with a tape boombox, using my brother’s guitar, it became my new favorite hobby. I finally got a guitar of my own around the age of ten, started taking lessons for a few years, and just recorded non stop, it was all garbage punk rock wannabe music, but right around when I discovered metal things changed.

When I was about thirteen, I began hanging out with the two metal kids at my school, and soon they joined my band. I was insistent upon playing punk, but they refused, so I tried writing metal, but I couldn’t do it. One day, we were all at a local record store, and for whatever reason I decided to buy three albums: Mercyful Fate – Don’t Break The Oath, Venom – In League With Satan (compilation) and Anthrax – Among The Living. I listened to those albums that night at my house, and my life was forever changed. Within these albums I heard the speed of punk, the musicality of classic rock, and a feeling of aggression that I would soon find out was called Thrash metal. From that point on, I was a thrash metal fiend, and I lived my life by the code of that music.

My friends and I soon formed a new band called Viravoid, which later became Dawn Of Wolves, and we recorded two EPs as well as a full-length album. I got further into more extreme thrash, such as the German bands and Brazilian bands, which made stuff like Anthrax sound tame by comparison. Eventually, I stumbled upon stuff like Bathory, Sarcofago, and Possessed, that’s when I jumped off the deep end, never to return. 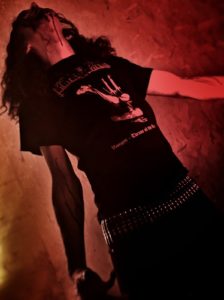 With Valdrin our influences haven’t changed much. Stuff like Bathory, Peste Noire, Dissection, Windir, early Xasthur, Order From Chaos, Manes, Mutiilation, The Chasm, Destruction, and a lot of soundtrack music, particularly the music of Nobuo Uematsu. All of these artists have influenced my style of guitar playing, song writing and vocals. This list will probably remain the same for all time.

Just to elaborate on what I said above: after I got my first guitar, I took lessons until I was about fourteen. Later when I was around sixteen, I got a chance to attend a new start up high school for the arts. So my last two years of high school I was studying jazz guitar, as well as rock guitar, though the latter wasn’t beneficial at all, because I already was a rocker. Going to that music school was beneficial in many ways, but at the time, I was an angry teen and still found a way to hate it. My Mother never cared to pressure me to do anything with music; she knew that I already had a grasp on what I wanted to do.

I love all kinds of music. Pink Floyd is one of, if not my favorite band. I like stuff from all across the board, whether it’s Skinny Puppy or The Cure, or punk rock stuff like Discharge, X, GISM. Horror movie and video game soundtracks, classic hard rock, progressive rock like King Crimson, Genesis and Univers Zero, weird stuff like The Residents. One of my newest favorite bands is Lycia, some of the most ethereal dark music I’ve ever heard. Too much to name, there’s great music everywhere if you look hard enough.

Music is not my full time job, and I never figured that playing black/death metal would ever pay my bills. I currently work in the warehouse of a music store, which isn’t too bad. It would be a dream come true to be able to make extreme metal music for a living, but at the very least, one can feel wealthy in life experience and personal accomplishments.

*If you could start a band with other musicians on other instruments, which artist would you pick for which instrument and why? (Something Like an “All Stars Band”.) Would you still go for a (melodic) black metal band? Or would you do something completely different?

Man, this is too hard. I’d rather just resurrect Jon Nodtveidt, Quorthon, and Chuck Schuldiner, and then just be a roadie for that band. 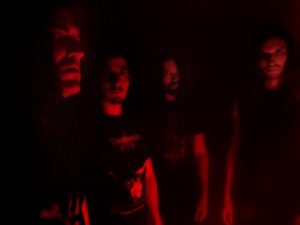 Another hard one, but ill try my best.

Bathory: ‘The Return’: my favorite album ever, my introduction to black metal and the greatest, most transcendent atmosphere of any album I’ve ever heard. This was the first time I realized that metal could be used as a gateway to the world(s) beyond.

Pink Floyd: ‘Saucerful Of Secrets’: this album has everything, joy, despair, humor, fear, horror, and psychedelic madness. It takes me on a journey every time, and leaves me centered by the time Jugband Blues finishes, and Syd Barrett speaks his final words as the singer of the Floyd.

Mercyful Fate: ‘Melissa’: the absolute masterwork of metal, but also an album that incorporates so much of the majestic 70s hard rock, and the feeling of gothic classical music. I can still remember the first time I heard this album, and how Satan’s Fall was the single most badass song I’d ever heard in my life.

Windir: ‘Arntor’: the title track of this album is my all time favorite song. I literally couldn’t survive without this song playing during my darkest and most triumphant times. Fortunately, the rest of the album is incredible as well. It’s all based on a true heroic folktale that engenders my spirit with triumph and the will to carry on.

Metallica: ‘Master Of Puppets’: I would probably need ‘Ride The Lightning’ as well, but perhaps this would suffice. This album represents the level of songwriting and dynamics that inform me, and even the stuff I like to listen to. I believe that even in extreme metal, there is a possibility to write records with a lot of dynamics. Also, I grew up on this album, who hasn’t?

For all of us in the band, it is our greatest work, but it also represents our complete isolation from the world, as we made it entirely for our own strange, cryptic reasons. We consider it a mini-album that perfectly encapsulates the feeling of a horrific nightmare for thirty minutes straight.

If you’re an eccentric music lover, who wishes to hear an album that conjures up visions of a red-lit nightmare hospital in the underworld, where a great evil god tortures his lower ranks of demons representing various archetypes of evil, then this is the album for you. I’m not sure if this person exists, but alas, I would recommend listening to the whole album to understand the concept, though each song will stand up on its own as piece of total horror metal. 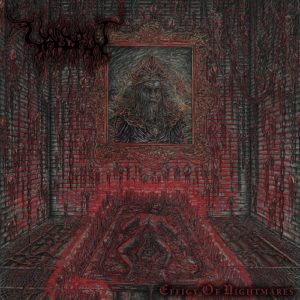 *We hope you will promote this album through live concerts (when of course everything is getting back to “normal” after the Covid 19 disaster). If so, would you prefer small clubs or big festivals? And is there a chance we can see Valdrin in Belgium?

We’ve played a few clubs and a few small festivals, and it doesn’t matter as long as we can spread our mythos to anyone who wants to hear it. We had some touring plans before the pandemic, but in the meantime, we are writing music for the next album. We plan on pushing Effigy Of Nightmares whenever things return to normal and we will bring a much darker, more visual element to our live set.

We would love to play for the people of Belgium. If they want us, we will come! Until then, we will continue to put out the best melodic black metal possible, and we will play for anyone, anywhere who wants us. Thanks for the interview!