“The kings of doom are back and in a big way! Sweet Evil Sun is a black gem of the genre: powerful production, pounding drums, rough guitar sound and well felt vocal harmonies. 9 solid songs plus an outro to remind us that Candlemass are the Black Sabbath of my generation, they are the ones who carry this heavy legacy and they do it with epic glory.” (Vorph – SAMAEL founder, singer & guitarist)

US Grammy-nominated epic doom legends Candlemass return to their roots with the supreme Sweet Evil Sun!

Clocking in almost four decades, it’s no stretch to say that Grammy-nominated Swedish epic doom legends Candlemass are still one of the heaviest metal bands on earth. As the godfathers of epic doom metal, the band defined the genre with releases such as Epicus Doomicus Metallicus (1986) and Nightfall (1987). Through their evil riffs, crushing rhythmic attack and dramatic vocals, they changed the landscape of metal worldwide. Reunited with outstanding original vocalist Johan Langquist, the band around founding member Leif Edling finds its way back to its roots and finally delivers the long awaited, earth-shaking new full-length album, Sweet Evil Sun, out November 18, 2022 via Napalm Records.

After working on this massive piece of art for 18 months in total, with Sweet Evil Sun, Candlemass brings back all the grandness of their early years, exploring themes of ambition and strife, hope and failure. Opening track “Wizard Of The Vortex” instantly casts a spell with a riff so powerful, the listener is immediately ensnared. Title track “Sweet Evil Sun” kicks in with warning guitar feedback before sludging a heavy-as-hell riff as Johan Langquist deftly warbles through melancholic, beckoning passages and a hooky chorus. His imposing vocals fit each riff and tone perfectly, emerging as an instrument in itself. The dark, classic rock-tinged Nordic metal anthem “Scandinavian Gods” reveals a perfect musical interaction between slow and heavy drums, droning guitars and majestic vocals as they convey mysterious tales of Scandinavian mythology to the next generation of doom lovers. Jennie-Ann Smith (Avatarium) lends her beautiful voice to the theatrical, grim “When Death Sighs”, creating a shimmering, intermingled chorus duet eventually backed by rising organs and a marching rhythm. The haunting atmosphere is highlighted by an amazing guitar solo that reads like a story as it bends and descends, marking the sign of death on the listener’s door. It comes as no surprise that, alongside the band, renowned producer Marcus Jidell captured the band’s massive, smoky guitar tones, powerful drums and larger-than-life vocals, offering a truly unique, high quality sonic experience. The artwork for Sweet Evil Sun was illustrated with the skilled hand of Erik Rovanperä, the architect behind Candlemass’ visual style since Psalms for the Dead (2012).

Recorded at NOX studio in Stockholm, Sweden, Sweet Evil Sun impressively showcases that, after almost 40 years in the game, the creativity of these Swedish doom masters sees no bounds. Through the power of wall-shaking riffs, incredible vocal performances and the blood and spirit of classic heavy metal, Sweet Evil Sun shines as a masterpiece of impending legend that truly honors the epic doom metal cult of Candlemass. 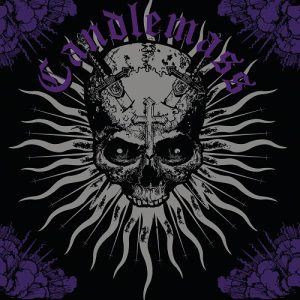 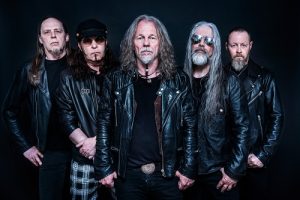