I was around 12 when I started listeing to metal Iron Maiden, Sabbath, Metalllica, etc. the classic’s of metal it started my long life love affair with the genere of music.

Like I mentioned on the previous quesiton classic bands like Sabbath, Maiden, Dio where and still are my passion I remember very early on I became a massive Mercyful Fate fan, the whole image and theme attracted me compeletly those album covers ‘Melissa’ and ‘Don’t Break The Oath’ where enthralling, I became spellbound forever ha ha.

Guitar it is, I remember learning metal songs through my record collection, all self taught. I took some lessons from local guitar players in Gibraltar but the majority of the time it was figuring it out by myself. There was no internet at the time so it was a challenge had to make it up as I went, and yes I always keeping trying to better myself as a musician lately hooked on classical guitar.

Oh yes of course never narrow your understanding and joy of music I would say its classical and flamenco for me though I love Pink Floyd and progressive and atmospheric stuff, really any thing thats good will interest me.

Well I need to work, luckly I have been a sound engineer for the past ten years and also work as crew for events /gigs, tv and shows etc. It’s all connected in some way. I would leave everything in a heart beat to just play guitar though I have expierence it with my last band as we where a proffessional outfit releasing five albums and touring the world, didn’t work in anything apart from the band through that period of my life. 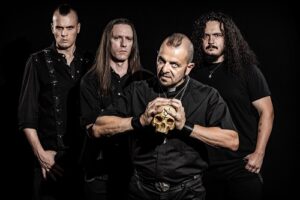 I think I would still have the same theme lyrically and musically why not, with whom its a difficult question ha ha I would be happy getting the Mercyful Fate classic line up or just playing in Dio’s ‘Holy Diver’ line up wow, it could be because I love that era of music. They were proper musicians who recorded on reel to reel tape no cut and paste generation ha ha .

Yes, you’re right, artists always believe the new album is thier best and I think its our best work to date, it took me blood, tears and sweat to compelete it. The whole album is amazing, this album is like a book and every song its a different chapter, so I wouldn’t say any given track is better than others it just gives you something different give it a try and it will grow into you take the voyage my friends. 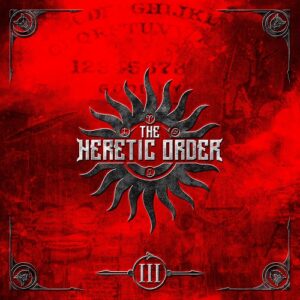 *Is there a chance that you will promote these songs through live concerts? If so, would you prefer small clubs or big festivals? And is there a chance we can see THE HERETIC ORDER in Belgium?

I would love to any promoters hit us, festivals even better so you can reach more people. Lets see how the album is recevied.