Johnny Arhondis. A constant source of metal and all good things.

I learnt double bass to begin with and took private lessons at school. Eventually I had to pick up a bass guitar for school musicals and enjoyed it much better. My parents expected me to get involved with school in a musical sense (although they were sick and tired of helping me carry the double bass around). After school, I was inspired to continue bass after listening to Rush and to hear that the bass guitar is so important in the scheme of the band. Although I am mostly self-taught, I do tend to look at play through, tutorial videos on YouTube.

In terms of deviating from metal, we do have our distinctive tastes in other genres. The most prominent would be classic progressive music (Genesis, Yes, King Crimson, Rush), progressive metal (Tool, Queensryche), hip-hop/ rap (Kendrick Lamar, Boogie, Eminem) and other wonderful, beautiful things (Toto, Moron Police).

Music is our passion at the moment. Our bassist has a job in social work, our vocalist / guitarist Johnny is working in a Deli (family business) hoping to become an English teacher one day. Our guitarist Tommy works on road marking and our drummer works in delivery. We hope to be as successful as we can be. If we reach a point where we can rely on music to put bread on the table then absolutely, we’ll quit on the spot. 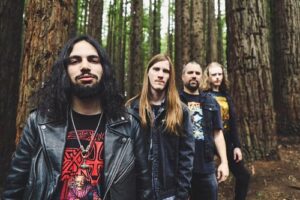 *If you could start a band with other musicians on other instruments, which artist would you pick for which instrument and why? (Something Like an “All Stars Band”.) Would you still go for a death metal band? Or would you do something completely different?

1. ‘Painkiller’: Judas Priest – To sooth the soul of our guitarist Tommy Lewko, whilst on the island.

2. ‘Red’: King Crimson – To sooth the soul of our drummer Tim Bottams, whilst on the island.

3. ‘To Pimp A Butterfly’: Kendrick Lamar – to sooth the soul of our guitarist / vocalist Johnny Arhondis, whilst on the island.

4. ‘Toto IV’: Toto – To sooth the soul of our bassist Rhys McKenzie, whilst on the island.

5. Moving Pictures: Rush – To sooth the souls of us all.

It’s hard to really point to one song off the album and say that’s the highlight of the album. Every track has been worked on to reach its most full potential in a collaborative and progressive manner. We hope the amount of hard we’ve put into writing and recording these tracks can be appreciated by the music lovers. We want them to especially appreciate the concept of the album. ‘Pillars Of The Faith’ is an album that is dedicated to dissecting the seven deadly sins and to present them in a way to our audience in a fashion that shows them to be part of human nature as opposed to just being declared ‘evil’ by an institution that has committed atrocities itself. 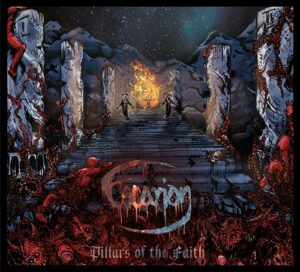 *We suppose you will promote this album through live concerts (when of course everything is getting back to “normal” after the Covid 19 disaster). If so, would you prefer small clubs or big festivals? And is there a chance we can see Escarion in Belgium?

We don’t mind where we play. To get the chance to play is an honour for us, whether it be small & intimate or big and loud. And you can expect Escarion in Belgium as soon as we can get there!