Comatose Music are still recruiting for the start of their 2021 campaign and the latest heavy hitting addition to their strike team is Slob, the UK’s self proclaimed purveyors of ‘Hillbilly Death Brutality’. Comatose will be launching Slob‘s sickening debut album, Deepwoods Barn Of Sodomy at the world early next year. Slob were originally formed as a two piece band, Ross Honour and James Murphy, but have since acquired the services of Jay Barnes and Jordan Varela of fellow Comatose shock troops Shuriken Cadaveric Entwinement. Comatose Music have issued the following official statement about the signing…

“Comatose Music eagerly welcomes UK based death metal beasts Slob. Formed back in 2013 as a two-man band, they slowly began working on new music for their debut album. After some lengthy setbacks they finally completed the arduous writing process. Slob recently announced the addition of Jay Barnes and Jordan Varela (Lust of Decay) to complete their putrid line-up and record Deepwoods Barn of Sodomy scheduled to be released in 2021. This album will prove to be an impressive debut of precision executed brutality! Nothing can prepare you for the sickness that awaits…”

“Firstly we would like to thank the new members Jay & Jordan for joining Slob and Steve Green and the mighty Comatose Music for having us on board and being one of the best and most brutal labels around, please stay tuned for further updates and thank you to all the Slob fans out there for your continued support! Cheers! Deepwoods Sodomy!”

Meanwhile Jordan Varela can’t wait for Deepwoods Barn Of Sodomy to be released… “I’m pumped as this music reminds me of nostalgic Deeds of Flesh Mark Of The Legion era meets Viral Load break down riffs. Definitely up my alley! I’m very excited!”

The chilling front cover artwork for Deepwoods Barn Of Sodomy was created by Jon Zig, whose twisted visions have graced albums by Defeated Sanity, Dying Fetus, Kraanium, Suffocation and many more. 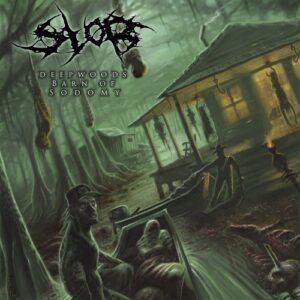 For god’s sake don’t go venturing into the deepwoods by yourself next year!