I’ve always loved music, but I guess I first started to get into heavier rock music when I was about 15 years old, that was when I joined my first band. Some guys in the area where I lived called round at my house and asked if I wanted to join their band because they had seen an electric guitar through the front window of our house and they presumed that I was the person who played it. So I guess those guys are responsible for getting me into heavier rock music, before that I was listening to Hank Marvin and The Shadows.

In my teenage years I was a huge Deep Purple and Ritchie Blackmore fan, then a big Rainbow fan when Blackmore left Purple to form Rainbow, but then a few years later I heard Gary Moore and that changed everything for me, I’ve been a massive fan of Gary Moore since I was a teenager. 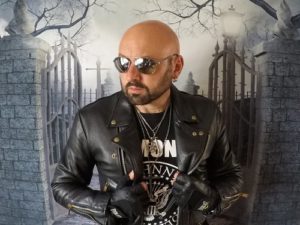 I play lead guitar, but I also play keyboards when writing and recording songs for our albums, but I’m not really a keyboard player, I’m definitely a guitarist. I started playing the guitar when I was 9 years old, before that I used to stand in front of the TV at home mimming to bands on the television, pretending that I was playing guitar. I had private guitar lessons from various teachers from the age of about 10 years old, but they were classical and flamenco style guitar lessons and not rock. I later started playing along to albums and copying the playing that I heard on them and thats when I really started to improve and learn how to play rock guitar. My parents did push me to play the guitar and to go to lessons, I used to complain to them when my fingers were sore from practising ! I havent had any lessons for a long time now.

I don’t listen to much rock music, I listen almost totally to Classical music, I find that if I listen to rock guitarists and rock bands too much, I start to play like them, so I find that Classical Music keeps my musical mind in a more neutral place.

I do have a day job, I am self employed, so I’m pretty much my own boss, which is useful when I need to get time off to go into studios etc. I would love to do music as a full time job, like many other musicians, but the reality is, there’s no monaey in the music industry for musicians any more, so most artists need a day job. I’m lucky in the fact that my day job basically funds my music.

*If you could start a band with other musicians on other instruments, which artist would you pick for wich instrument and why? (Something Like an “All Stars Band”.) Would you still go for a melodic rock band? Or would you do something completely different?

I guess I would go for something completely different. Playing with some classical players might be interesting? I would choose the players below because they are simply amazing players.

Soundtrack to ‘Game Of Thrones’ – Emotional music that stirs the imagination

This is our second album, the songs on this new album in my oppinion are all strong and overall the album is a lot more consistent from start to finish than the last one . My main focus has always been to write good songs, well arranged and very melodic and I think we have achieved that with this new album. We have a phenomenal world class singer in the shape of Jason Morgan, so a lot of listeners will love his voice and my guitar playing isn’t too bad either…lol…plus we have great keyboards from Rick Benton (MAGNUM), bass guitar from Dan Clark (Rebecca Downes) and drums from Neil Ogden (Demon). I think all the songs on the album are good for their own reasons, but a few I’d like to mention are: ‘The Border’: Powerful song with great vocals and great guitar solo / ‘I Just Might’: Great song, different to your usual melodic rock song / ‘Make Up Your Mind’: Has a slight Beatles influence, another great song / ‘I Want It All’: Classic Melodic rock song. 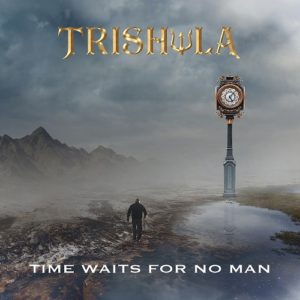 *I suppose you will promote this album through live concerts (when of course everyting is getting back to “normal” after the Covid 19 disaster). If so, would you prefer small clubs or big festivals? And is there a chance we can see Trishula in Belgium?

Well, we would love to take the band out live when the world returns to some sort of normality, I don’t want to play clubs and pubs, we’ve all done that in our past and it takes a lot of energy for very little reward when playing small clubs and pubs. So I’ve always said that my main focus is aimed at playing festivals, they are much more beneficial to the band and the artists in the band. Our record label AOR Heaven do a fantastic job of promoting us across Europe, so I’m sure when the time is right we may well make it over to Belgium.