While I was growing up, my parents took me to a lot of concerts, mostly either the orchestra or some kind of folk band (Celtic, Bluegrass, and even some cajun stuff). Eventually in my early teens I started getting into rock music, but it wasn’t until I discovered the immortal Manowar that metal really clicked with me. I still remember first hearing their song ‘Swords In The Winds’ in a video set to footage from the Lord of the Rings films, good times. After that I was just listening to every metal band I could find.

A hard question to answer since I have multiple projects that draw inspiration from so many different bands. If I had to pick two artists that seem to haunt me no matter what what kind of music I’m making, I would choose Ennio Morricone and Quorthon. Morricone for how he is able to be very experimental and sophisticated while still being extremely accessible and easy for anyone to understand. Quorthon for the sheer energy and epic magnitude he was able to infuse in his music, while still always developing his sound in new directions.

Guitar is my main instrument, but I’m also reasonably proficient on the keyboard/piano and can sort of fake my way through a lot of other instruments. Piano was the first instrument I learned, and I took lessons for many years back in my school days. I also particpated in the percussion ensemble/drum line during high school which helped a lot in terms of understanding rhythm and how to work in a larger group setting. I never took any formal lessons for guitar, but found a lot of resources online that helped quite a bit. Really the amount of information available online is staggering and I am still constanly looking for new stuff to learn, but I haven’t taken any of sort of one-on-one music lesson in awhile.

I listen to so much different stuff haha. Really for the past year or so I haven’t been listening to too much metal just cause I’m heard so much already. I got really into classical music last year and totally dove into that world for awhile. Lately I’ve been listening to some jazz and funk/soul type stuff. I just had my mind blown today by Fela Kuti’s ‘Roforofo Fight’, amazing afrobeat music with insane rhythmic layering and great horns.

Music is still a part-time thing as of now, though I have decided that I’m not really interested in anything else to the extent that I could see myself doing it as a career. So I guess I’m stuck with music haha. Right now I work in retail, doing merchandising in a big hardware store. I went to school for film/tv but quickly decided that really wasn’t my thing since it seemed to be mostly focused on image and surface level aesthetics. I definitely greatly appreciate being able to do something very down-to-earth and “essential” for society right now. My store stayed open during the entire pandemic while almost all media productions had to shut down, so I guess I choose wisely!

*You play in a heavy metal band (Emerald Rage), you are responsable for the epic black metal band Untamed Land, and now you’re also in charge of Hieros. Which is your main band at this moment? And can you finf enough time for each of these bands / projects? Or do you something “on hold”?

It’s definitely a pretty insane juggling act at the moment, especially when you throw my job into the mix on top of everything. Now that the Hieros EP is finished up, I’m switching gears to focus on the next Untamed Land album, which I would probably consider my main project if I had to choose. It’s the most “natural” music for me to write personally. It seems I can throw in whatever weird and distinctive element I want while still keeping an epic and mythic atmosphere permeating everything.

That’s a tough one! Hmm.. I would probably try to arrange some big extravegent ensemble that would do like 20 min long crazy roots-y jazz/psych jams. Definitely get Shabaka Hutchings on saxophone. Probably get the brass section from Streelight Manifesto. Randomly have me and someone like Vindsval from Blut Aus Nord doing weird distorted psychedelic guitar riffs. Darkside from Mgla doing crazy polyrhythms on drums. Henri Sorvali on keys and Philip Glass on organ. Then get Slim Cessna and Jay Munly to do their redemption/damnation dual preachers thing going and we’ll be good to go! My God what have I done…

If you asked me tomorrow I would probably pick 5 different albums but here’s what comes to mind:

‘Kivenkantaja’ by Moonsorrow – Always an instant mood-booster and fist-pumper for me, would probably help keep my spirits up.

‘We Shall Overcome’: The Pete Seeger Sessions by Bruce Springsteen – Perfect slice of traditional Americana tunes. Country, Blues, Jazz, Celtic, Zydeco, has it all.

‘Bach’s Mass in B minor’, the 2015 recording conducted by John Eliot Gardiner – For when I want believe that there is goodness and beatury in this fallen world.

‘The Donkey Kong Country 2 Soundtrack’: Fits the island theme and will instantly take me back to the carefree days of my childhood

‘666’ by Aphrodite’s Child – For when I want to pull a total John of Patmos and take a trip on some island mushrooms.

*Every new album of a band or an artist is the best one (we know it’s the first under the name Hieros), that’s what they always say. So here is a chance to promote the album. Why should a music lover buy the first ep of Hieros?

It’s only about 17 minutes so it’s not a big time investment! It’s got some cool riffs that work well together probably! Dang I’m bad at promo. Here, if you want to listen to some invigorating and super raw extreme metal riffs that cascade into a frenzy of primal spirituality, then Hieros is your ticket! There, that was better. 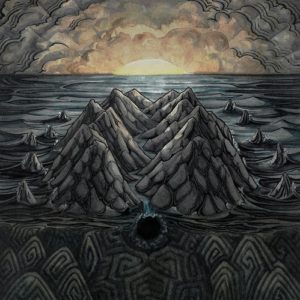 *I don’t know if there is a change that you will perform live with Hieros, when of course everyting is getting back to “normal” after the Covid 19 disaster. If so, would you prefer small clubs or big festivals? And is there a chance we can see Hieros in Belgium?

No concrete plans for live shows as of yet, but never say never! Either clubs or festivals would be fine with me, as I think this sort of music would work equally well in both contextes. I would love to come to Belgium sometime! Always wanted to visit Bruges ever since watching that movie “In Bruges” haha. Thanks for this interview, it was great fun!