Music has been a huge part of my life for as long as I can remember. Every day and every event has its own soundtrack. My earliest memory of heavy music is being introduced to Iron Maiden by a school friend and promptly acquiring all of their albums and listening to nothing else for months! After having my eyes opened in the best possible way, it wasn’t long before the other usual suspects arrived on my stereo; Metallica, Guns n Roses, Megadeth, Alice Cooper, which, I guess dates me somewhat!

My inspirations are drawn from a very broad field rather than a specific genre. I find myself drawn to lyrics and moods first and foremost, to bands that create a mood, an atmosphere or that paint a picture with words. When I was first learning to play I was listening to a lot of Public Enemy, Alice in Chains and punk as well as the aforementioned classic rock and metal. My earliest Black metal influence would be Darkthrone after covering Transilvanian Hunger in a previous band. This revelation lead me into a world of freedom, expression and pure creativity. Bands like Watain, Behemoth and Satyricon showed me the way into darkness, capturing power, imagination, atmosphere and energy.

In true punk tradition, I’m an entirely self taught guitarist. When I was 16 I worked all summer in a bakery to save enough for my first guitar (a Telecaster) and amp ( I can’t remember the brand but it was horrible!) I try to maintain a practice regime that allows me to develop new techniques as much as I can, although I must confess to not being the most diligent student!

As I mentioned earlier, I’ve always listened to all sorts of music. My heart will always belong to dark, heavy music -it moves me in ways that other genres don’t but my current playlist includes all sorts. Favourites at the moment are the new Temple of Void album, Celtic Frost, Craft, and Jay -Z.

We’re lucky enough to be at a point with Shadowflag where we earn enough to support our gigs and tours but sadly we all still need to pay the rest of the bills somehow. So when I’m not playing, I can be found behind the bar of my little beer shop. I think every musician would love nothing more than to able to support themselves purely through music and that’s no different for me, if I could spend my days writing and playing, I’d be a very happy man! 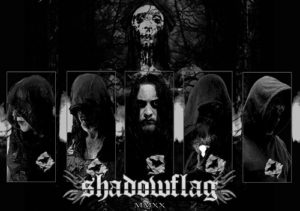 *If you could start a band with other musicians on other instruments, which artist would you pick for which instrument and why? (Something Like an “All Stars Band”.) Would you still go for a black metal band? Or would you do something completely different?

Beastie Boys – ‘To The 5 Boroughs’

Alice in Chains – ‘Jar Of flies/Sap’

*You all live apart from each other. How do you work on songs? Is there someone who comes up with an idea and then you work from there on? Do you all come together to work on a song? Or do you send files to one another?

JJ and Carps are the main songwriters in the band. Typically we use Guitar Pro to compose and share ideas. These can be fully formed songs or frameworks to build upon. We started working this way in the early days of Shadowflag when we were using tracked drums- this obviously meant we couldn’t all jam together and build songs organically. However, both JJ and Carps are such strong writers that at least 80% of what they bring to the band is usually perfectly formed already aside from solos, textural parts and quite often lyrics. We tend to add these in as we start to rehearse together and build the songs into their final form. Now that we have brought Robb on board to drum, we’re looking forward to working in a more natural way, hopefully when we can get back in a room together we can all bring riffs to jam out and get lost in.

Each of our previous records has been defined by its concept; Shadowflag was the tale of the Voyagers journey from captivity to enlightenment, The White Grave told the tales and legends of the worlds forgotten street children, and The Delusion Machine addressed the terrifying, unknowable nothingness that surrounds human existence. In Asylum Requiem, on the other hand, was written to showcase the strongest, most explosive songs we could write. It’s deliberately shorter than the others with the focus turned towards the primal explosion of the riffs and rhythms. As we wrote, unsurprisingly it gained its own life and became the story of isolation in a mad, over developed, over populated and selfish world. Themes that have always surrounded us, have always been at the core of all we oppose. Themes that sadly, seem more relevant than ever right now. Standout tracks for me are, first single ‘From Agony to Cold’ for its blazing main riff and spite filled vocal and ‘One Beast, One God’ for its old school thrash vibe and monstrous, thundering middle eight. 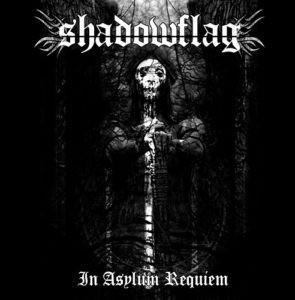 *I suppose you will promote this album through live concerts (when of course everyting is getting back to “normal” after the Covid 19 disaster). If so, would you prefer small clubs or big festivals? And is there a chance we can see Shadowflag in Belgium?

Rest assured, as soon as we can, we’ll be back on the road. This has already been by far the longest we’ve gone without playing in the history of the band. We live to play live and to be unable to do that has been the hardest part of lockdown for us. We’ll happily play both small clubs and big festivals! They offer a completely different experience for both band and audience. We learned to be a band on small stages all across the UK, we learned how to perform, how to present ourselves and how to be professional in the back rooms and basements from Brighton to Edinburgh and we’ve loved them all. We have had the opportunity to play festivals such as Carpathian Alliance in Ukraine (which was an incredible, once in a lifetime experience) and HRH Vikings in Sheffield at the end of last year. Small club shows have a sweaty, intimate energy that drips from the ceiling. A dark, noise and smoke filled intensity that creates a bond between band and audience that can never be replicated. Festivals offer a euphoria of space, light show, stage crew and sound quality that makes each show a celebration. Right now, we just want to be back on stage, any stage!